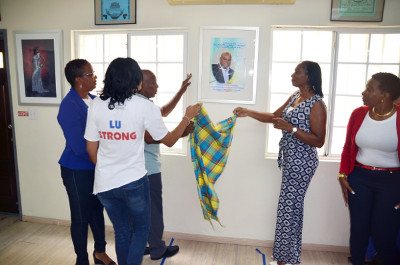 CAY HILL:--- Students and faculty of the Learning Unlimited (LU) Preparatory School paid tribute to the late Neville York on Friday, November 10th with a St. Maarten’s day celebration in his honor and by unveiling his memorial portrait in the school’s performance arts room.

The program was held as part of a special assembly entitled “LU Strong, SXM Strong” and featured several musical and dance performances by the students and teachers. The students used every opportunity to express how much York meant to them and the school, wishing “the man, with the pan, in his hand” was still with them.

Coordinator of the program and Head of the Primary School Amissa President described York as a person and artist who gave his all to LU and its students. He introduced steelpan at the school and devoted his time to help develop performing arts at the school. Dedicated, approachable, caring and committed were just some of the words used to describe York.

Minister of Education Silveria Jacobs was also present and spoke glaringly about York. The Minister said while Hurricane Irma took away many material items, the loss of a person, a person who meant so much to his country and to children, is not a void that is easily filled, if ever.

York’s portrait was unveiled by his widow Veronica York and brother Chester. The unveiling drew an emotional reaction from everyone in the room. The picture reads in part: “No one can ever say goodbye to a teacher, for they forever stay in little homes called hearts of their students. Farewell.”