~ Politicians on St. Maarten had one common enemy, I was blamed for almost everything ~ 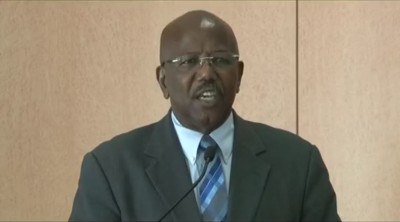 PHILIPSBURG:--- Ousted Prime Minister William Marlin held an emergency press conference on Friday where he gave a total recap on what transpired from 2014 to present that led to the Dutch Government forcing him out of office. The Kingdom Council of Ministers issued an instruction to the Governor of St. Maarten to execute the resignation of the Prime Minister William Marlin, it should be noted that Marlin submitted the resignation of the Marlin II Cabinet after the UP/DP/ Brownbill coalition passed a motion of no confidence against five Ministers of his cabinet, after that the said coalition passed a second motion ordering Marlin to leave office, none of which worked until the Kingdom Council issued an instruction to Governor Eugene Holiday.
Marlin in his presentation said that the Dutch wanted the Integrity Chamber established on St. Maarten at all cost, something he said will trample on the basic human rights of the people of St. Maarten. Marlin said that while he was blamed for almost everything since the passing of hurricane Irma, the main focus from the Dutch was to get the Integrity Chamber established at all cost in the way they wanted it forgetting the decisions taken by the Constitutional Court and the Council of State. Marlin also reminded that he drafted the legislation to curb ship jumping but that legislation was put aside by the Dutch because according to them will hinder the “free mandate”.
Marlin said that local politicians were planning to bring down the Red/White and Blue coalition and they chose to use the Dutch aid and the devastation of the country for their own political gain. Marlin said that SP cartoon that was published by one newspaper is a total insult to the people of St. Maarten while MPs on St. Maarten did not condemn that cartoon. However, they chose to become the rubber stamp of the Dutch to enable the Dutch Government to impose their will on St. Maarten even though it’s not right.
Marlin said he is not saying goodbye, he is simply resigning since the Dutch Government will send the Governor an LB to dismiss him. Marlin said he already resigned but he will leave office because he does not want to prolong the issue. Marlin said the Dutch Government cannot fire him as he did not do anything wrong instead he stood up to the Dutch Government after they were bent on enforcing their will on the people of St. Maarten with the help of local politicians.
“I am not quitting and I am not leaving,” however the National Alliance decided in 2014 during the party’s congress to hand over the NA leadership to the deputy leader Silveria Jacobs. Marlin said he stuck to his promise to allow the deputy leader lead the NA slate. Marlin also announced that he will be a candidate on the NA slate in 2018 and he will allow his fate to be in the hands of the people of St. Maarten and not the Dutch Government.
Marlin acknowledges that this may not be a good time for an election but if there is a political dispute then that dispute must be settled by the ballots and not otherwise.