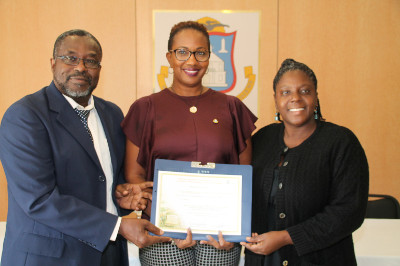 PHILIPSBURG:--- St. Maarten henceforth has its first successful entrée of its documentary heritage in the Memory of the World Register for Latin America and the Caribbean. The Memory of the World Programme (MoW) is a UNESCO initiative, created in 1992, aimed at preserving the documentary heritage of the world – housed in libraries, archives, and museums – as a symbol of the collective memory of humanity. It calls for the preservation of valuable archival holdings, library collections, and private individual collections. A range of formats are embraced under the rubric “documentary heritage” such as paper, music, videos, scrolls, art, stone and fabric. This heritage reflects the diversity of the people, cultures, and languages; it belongs to everyone and must be fully preserved, protected permanently and be easily accessible.

The Memory of the World Program has three main objectives:

St. Maarten submitted, for consideration from the Civil Registry: the 'Slaven Register 1863, One volume with the names of all the slaves that were freed on St. Maarten when slavery was abolished including their age, sex, and children. And from the Archives: Brieven aan Diversen, Dates: 10 September 1847 – 17 April 1861 / 20 April 1861 – 23 December 1863; various correspondences between the government of St. Maarten and the governments of the various islands pertaining to runaway slaves and also concerning the aftermath of the abolishment of slavery in the English and French territories.

The committee also recommended that this submission be sent on to UNESCO for consideration for the International Register, which was also accepted and the certificate of acceptance will be made available within short. The Minister of Education, Culture, Youth and Sport, Silveria Jacobs, was presented with a copy of the certification of induction by Mr. Alphonso Blijden and Ms. Marcellia Henry, Secretary General for UNESCO. Minister Jacobs congratulated Mr. Blijden and Ms. Henry on the great accomplishment for St. Maarten.