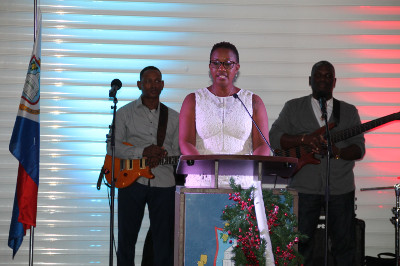 Under the theme - "Attitude of Gratitude" - the praise and worship team of the Christian Fellowship Church kicked off the service with songs of praise and thanks to God, followed by the St. Martin Song being sung by Pastor Benjamin Bell and an opening prayer by Pastor Orlando Wilson.
The service continued with poignant hymns of thanks, words of welcome from the SMUMF representative Wally Havertong and touching remarks of resilience and gratitude from the Honorable Prime Minister R. Boasman, who asked the congregation to give thanks at all times, not only in good times. Even though we have been through the devastation of the Hurricanes, we will, with an attitude of gratitude, continue to give thanks for his grace and mercy and allowing us to be here with health and strength to work together to rebuild our beautiful Soualiga.

Several Renditions, scripture readings, and prayers were contributed by representatives of the Seventh Day Adventist, SMUMF and CC.
Pastor Lewis Constant gave a heartrending and soul-searching sermon, reminding the congregation that no one is higher than the Lord, He alone is God and he sees and knows all.
Calls were made during the sermon and prayers to put God first, Unity, Forgiveness, Love, Peace, and Healing. All in all, the service was uplifting and brought participants a sense of peace and togetherness.

This sense of Peace and Hope was further realized with the commencement of caroling by the praise and worship team, and the lighting of the two Christmas trees by Prime Minister Boasman and Minister Jacobs. The service came to a close with the Vote of Thanks by Minister Silveria Jacobs who gave thanks to the organizers and participants of the service and ceremony and also took the opportunity to commend the community workers, churches and organizations who played a key role in helping the people of St. Maarten directly after the passage of Hurricane Irma and handed out certificates to the various representatives present. She also took time out to share the spirit of Christmas with those in need and to continue to look out for neighbors and others still displaced or suffering at this time. The service ended with the benediction by Rev. Dr. Joan Delsol-Meade after which the Christmas Carol Medley allowed the congregation to mingle, meet and greet before leaving for their separate homes feeling blessed and refreshed.