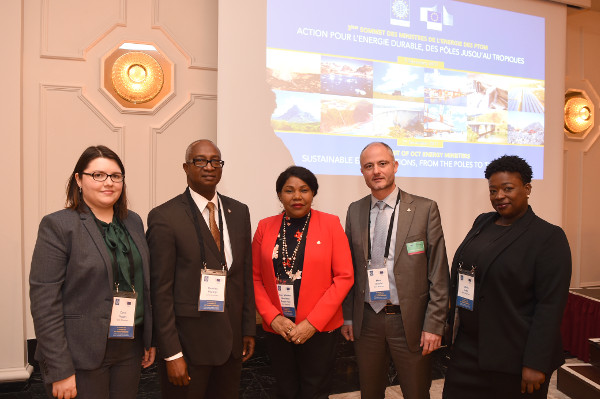 GREAT BAY:--- Cooperation with the French side of St. Maarten is a key component for St. Maarten, in its ongoing rebuilding and development efforts. This is a prevalent sentiment of St. Maarten following its recent attendance of high-level meetings held in Brussels.

While in Brussels, agendas for meetings ranged from showing appreciation for efforts in securing funds for St. Maarten after hurricane Irma, to requesting support and assistance in seeking additional funding as well as discussing the ongoing status of programming for St. Maarten with regards to post-hurricane Irma fund reallocations.

St. Maarten association with EU
In the weeks following Hurricane Irma, St. Maarten received significant attention from the highest levels in Europe. The discussions surrounded St. Maarten’s specific situation of being associated with the European Union (EU), having status as an Overseas Country of the Kingdom of the Netherlands but also sharing a border with Europe through French St. Martin.

To better coordinate with key partners and potentially access additional EU funding, it was decided that visits to high-level officials in the European Union should be made, given the opportunity provided through the Ministerial Energy Summit. This was made possible by the permanent representative of the Kingdom of the Netherlands in the EU.
The St. Maarten delegation led by the Secretary-General of the Ministry of General Affairs, Hensley Plantijn, arrived in Brussels two days prior to the conference to attend those meetings with high administrative and technical levels, in the run-up to the actual conference.

St. Maarten’s experience with EU funding destined for post hurricane Irma recovery has been that very little additional funds have been set aside while more funds are actually needed.
Previous EU positions made clear that there would be equal treatment for both sides of St. Maarten. In practice, this has not always been the case.
The Dutch Euro MPs expressed disappointment with what has been occurring since they had expected that St. Maarten would receive similar treatment as the French side of the island, based on discussions held in the EU parliament.
In the end it was decided to name a coordinator who will also look for unused funding from the EU or other funding that might be used for recovery of both sides of the island.
Among the tasks of the coordinator would be to stimulate equal treatment for both sides of St. Maarten while providing the Dutch MPs in the EU parliament, an opportunity to monitor the progress being made.

Summit of the OCT Energy Ministers
The 1st Summit of OCT Energy Ministers in 2015 served as a platform to finalize and sign the current targets in the Sustainable Energy Roadmap. Furthermore, the summit was used as platform to identify and establish the priorities for the 11th EDF Thematic Programme. This 18 million Euro programme entails all global OCTs.

This 3rd summit served to increase the understanding of the OCTs potential, specifically in the Marine Energy area and the role OCTs can play as test-beds for pilot innovations. At the summit, OCTs discussed with EU policymakers and other stakeholders the participation or association of OCTs in relevant initiatives such as the 'Clean Energy for EU Islands' launched in May 2017.

Attendance St. Maarten
As Regional Authorizing Officer for the 11th EDF Caribbean Regional Programme, St. Maarten is represented at these types of events not only as an individual OCT but also to represent, when necessary, the interests of all Caribbean OCTs.

During the recently concluded summit, St. Maarten provided a short presentation on the status and complementarity between the 11th EDF Caribbean Regional Programme and the so-called 11th EDF Thematic Programme.