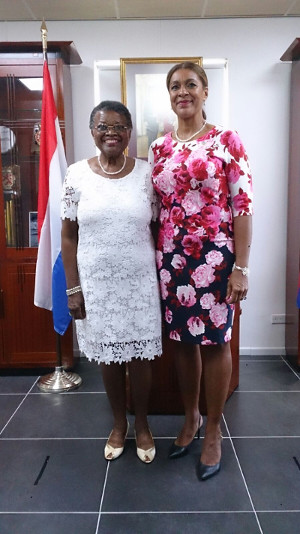 PHILIPSBURG:--- On Monday, January 15th, 2018, His Excellency the Governor, drs. Eugene B. Holiday, administered the oath of office to Ms. Jorien Wuite as Minister of Education, Culture, Youth & Sport (ECYS).

Wuite, a senior civil servant and former Secretary General of the Ministry of ECYS, is the daughter of two educators and granddaughter of well-known butcher and farmer “Alec the Butcher” from Middle Region. Wuite is also a candidate on the United Democrats slate, contesting the upcoming February 26th election.

At the constituting meeting held at the Government Administration Building, Governor Holiday congratulated the new Council of Ministers including Minister Wuite and wished them wisdom in the conduct of their responsibilities as they seek to meet their constitutional responsibility to the people is Sint Maarten.

A humble and thankful Wuite took the oath in front of family members and representatives of the new coalition and her party.