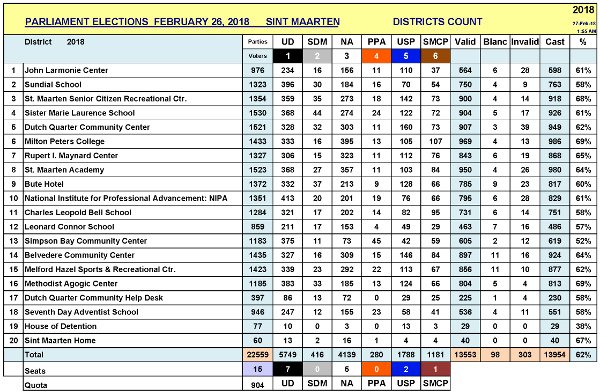 PHILIPSBURG:--- Of the 22,559 registered voters some 13,932 voters cast their votes by 8 pm Monday night. The number of votes cast accounted for 62% of registered voters. In September 2016 there were 22,302 registered voters, some 14,582 cast their votes. Based on the preliminary results given out when the polling stations closed on Monday some 650 voters that voted in 2016 did not vote this time around. The quota to obtain a seat is 929 votes needed to obtain one seat.
Throughout the night on Monday, the United Democrats led by Theodore Heyliger took on the lead. The UD maintained that strong lead in almost all of the districts, with the National Alliance and USP trailing behind.
For the first time a new political party was elected to Parliament, that new political party is the St. Maarten Christian Party led by Wycliffe Smith. Even though the SMCP is a fairly new party that contested the election only twice in the past 17 months, leader of the SMCP Wycliffe Smith stayed the course since contesting the election in 2016. Smith made sure he followed the political developments and the way the country was governed and quite often made the public aware of the party’s thoughts.
Around 2 am on Tuesday morning the Chairman of the main voting bureau Jason Rogers announced the preliminary results which granted the United Democrats (UD) 5,749 votes out of the 13,93 votes casts, the National Alliance (NA) 4,139, United St. Maarten Party (USP) 1,788, the St. Maarten Christian Party (SMCP) 1,181, The Peoples Progressive Alliance (PPA) 280 and the St. Maarten Development Movement (SDM) 416. There were 303 invalid votes with 98 blank votes.
Based on the amount of votes each of the political parties obtained the UD secured 7seats, the NA 5 seats, the USP 2seats and the SMCP 1 seat, while the SDM and PPA did not secure any seat.
There were 13,954 votes cast out of the 22,559 registered voters. In this year’s parliamentary elections the votes cast decreased by 3%.
The results given out early Tuesday morning are preliminary which will be validated five days later.

According to early morning reports the United St. Maarten Party Frans Richardson has formed a coalition government with the United Democrats. 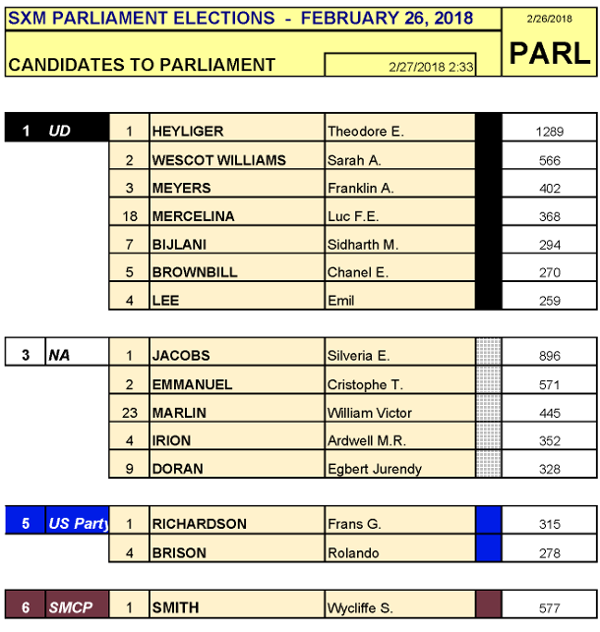 Click here to view a breakdown of the individual votes.