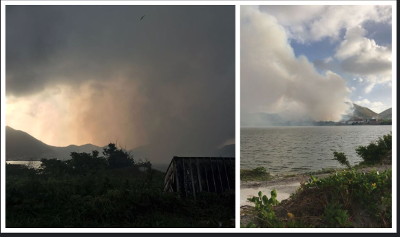 PHILIPSBURG:--- The Landfill in Philipsburg is once again on fire, causing the thick smoke over most parts of the island.
Part of the landfill on Pond Island is on fire as of around 11.30pm Friday night. Residents living downwind in the Philipsburg area and surrounding neighborhoods from the smoke, should close windows and doors.

This advisory is especially for persons who have a respiratory challenge such as asthma or shortness of breath.

The Fire Department is working on containing the fire at the landfill on Pond Island which erupted during the early morning hours of Sunday.

The company responsible for the management of the landfill is also working diligently to extinguish the fire.