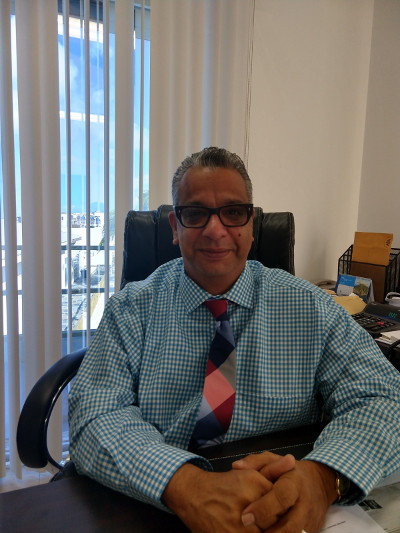 ~ Be Patient as management of PJAIE are doing its best to get facility up and running. ~

PHILIPSBURG: --- The rebuilding of the Terminal Building of the Princess Juliana International Airport (PJIAE) will take at least 18 months after the renovation kicks off. The project is scheduled to kick off by mid- October 2018 says Interim Chief Executive Officer and Chief Financial Officer (CEO/CFO) Ravi Daryanani.
Daryanani took on the helm of PJIAE management as of January 2018 while he started his job as CFO in November 2017. Without mixing words Daryanani said it’s been challenging ever since he started his new job especially since hurricane IRMA destroyed the Airport Terminal Building. It’s also challenging now because more airlines are scheduled to return to St. Maarten.
The current focus for management is to properly secure the roofing of the building which should be completed before the peak of 2018 hurricane season. PJIAE management has enlisted Corgan as the project management team, whose task is to ensure all preparations are made for the reconstruction. The interior demolition of sheetrock and other paneling will also be completed by May 31st.Daryanani emphasized that mold remediation will be done when all the sheet-rocks are removed. He said PJIAE has to ensure that there is absolutely no mold inside the building when it’s completed.
Corgan will also oversee the bidding process for the reconstruction and they will be the ones that will evaluate the bids submitted by the different companies. “The bidding will be an open bid, done by an independent company who will also write the Terms of Reference (TOR) and will also submit an advice to management after their evaluation.”
Asked if PJAIE management did what was necessary just after IRMA to properly secure the building to avoid the mold. Daryanani said that management did what they could at the time. “They did the best they could with the materials that were available on St. Maarten after the passing of IRMA.” He said the adjusters that evaluated the damage done to the airport confirmed to management that PJIAE could not have done more than it did to avoid the mold inside the building. “I am aware that there is a lot of speculation out there but I want to remind everyone that two days after IRMA there was the threat of JOSE and then eight days later there was MARIA. I honestly believe that management at the time did all they could to mitigate further damage after the passing of IRMA, they used the material and manpower that was available to them at the time. People tend to forget that the airport was taken over by the military, there were no materials on the island, no flights were coming in to St. Maarten I honestly believe that the perception out there is not correct.”
While PJIAE management are working diligently to get the reconstruction off the ground PJIAE management still has to wait on the outcome of the injunction they filed against NAGICO Insurances.
INSURANCE hurdle, PJIAE has a claim of $133M which also includes business interruption cost.
Daryanani made clear that PJIAE hired Wills Towers Watson as the claims adjuster, he said that the communication between NAGICO is still open and that he is hoping that parties will find common ground when it comes to the settlement as this is not about any one person but instead about the island and its economic pillar. Asked if Andre Wright has been doing a good job with the negotiations. Daryanani said that Wright is not the one negotiating with NAGICO however, his presence is needed because he is representing the bondholders. Daryanani said there is also misconception with Wright’s function at PJIAE. He said prior to his appointment Wright was assisting with the airport finances, but now that he took over Wright’s function will diminish over time.
Daryanani also confirmed that NAGICO already made three advance payments to PJIAE which amounted to $25M (NAF45M). Those payments were made in three installments, the first he said was made in October second in December 2017 while the third in March 2018. However, PJIAE has to rebuild and the funds are needed. “It’s logical that PJIAE takes the necessary steps to settle the claim because so far only an advance of $25M was paid to PJIAE.
The advances were used to reorder equipment such as the radar system, which will be installed as early as this week and to repair the roof as well as cover the demolition and the initial cleanup costs right after the hurricane.
As for the concerns the hoteliers especially Sonesta Maho who is planning to reopen by October/ November 2018. Daryanani said he is expected to meet with Spadaro as early as Tuesday to further discuss their plans since the airport does need the data from Maho to also plan how to move forward to handle more capacity of passengers coming through the airport. . The CEO/CFO said he has already discussed these bottlenecks with the PJIAE Chief Operations Officer Michel Hyman because he believes the ground floor of the Terminal Building, as soon as it can be repaired and made functional should be one of the options looked at to better handle the influx of passengers traveling in and out of St. Maarten. There are also several other options being looked at.
Daryanani said that the Airport has approximately 275 employees on its payroll and that so far, no one has been terminated. He said the airport does not have any intention in layoff its workers but he did say that some cuts or spread out on the fringe benefits will most likely have to take place.
The CEO/CFO also gave credit to the unions that are representing the employees at PJIAE since he has had talks with the employees and their union representatives.
Daryanani asked the people of St. Maarten to exercise some patience since Management are doing everything possible to get the airport rebuilt and fully operational.