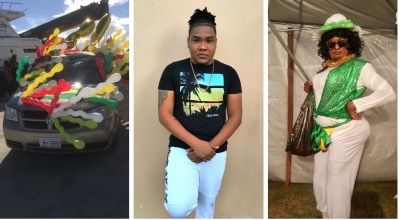 ~Outstanding Guyanese to be Honoured~

PHILIPSBURG:---  Guyanese across St. Maarten/St. Martin will on Saturday, May 18, 2019, launch a week of celebrations to mark their country’s 53rd Independence anniversary, which will be observed on May 26. The St. Maarten Guyanese Association (SMGA) has planned a series of activities to celebrate this auspicious occasion.

This year, the celebrations will begin on Saturday, May 18, 2019, with a church service at the Good News Seventh Day Adventist Church located on Pendant Cactus Drive, Sucker Garden, from 10:00 hours. Persons are encouraged to attend this service and be attired in one or more of the Guyana flag colors.

On Wednesday, May 22, 2019, there will be a Cocktail and Award Ceremony to honor outstanding Guyanese persons in various fields in the St. Maarten society as well as students who have performed successfully at the 2018 CSEC/CAPE examinations. This ceremony will commence at 8 pm and will be held at the Association meeting room located at 158B Back Street, Philipsburg. Students of Guyanese heritage who have attained a minimum of Five (5) CSEC/ CAPE passes with Grades 1 and 2 are asked to provide proof of their CSEC/ CAPE passes to President Velda Blackett Tel. no. 5801617 or Secretary Joshua Schwiers Tel. no 586-3335 by May 17, 2019.
The Association is also collaborating with the Epic group to host a two-day Cricket Festival on May 25 and 26, 2019 at the Carib Lumber Ball Park, Cul-de-Sac. A number of overseas and local stars will be featured on both days such as Racheem Cornwall, an all-rounder of the St. Lucia Stars and Leewards Island Hurricanes, Christopher Barnwell of the Guyana Amazon Warriors, Sherwin Peters, Keacy Carty and Akeem Charles of St. Maarten.
On May 25, there will be a motorcade commencing at 2:00 pm from the Ring Road (in the vicinity of the old Air Lekkerbek) to the Festival Village entrance and ending at the Carib Lumber Ball Park, Cul-de-Sac. Persons are encouraged to beautify their vehicles to showcase aspects of Guyana since prizes will be awarded for best-decorated vehicles.
The motorcade will culminate with a Family Fun Day at the Carib Lumber Ball Park from 15:00hrs and patrons can expect fun games such as rounders, 'sal out', hopscotch, cricket, dominoes and fun races for both adults and children. There will be a variety of succulent Guyanese dishes and beverages on sale. In the evening there will be a stage show featuring Local Guyanese DJs who will be providing music from 18:30hrs. Guyanese music sensation Blaze Antonio will be performing his hit single 'Blow" and other latest tunes alongside Guyanese comedian "Granny Ivelaw".
There will also be the drawing of a raffle on May 25, 2019, at 8:00pm that offer attractive prizes, such as a return air ticket for two sponsored by Winair. The SMGA is also encouraging all Guyanese to turn out in their numbers to join in the celebrations that are planned for this year.
SMGA is encouraging all Guyanese or persons of Guyanese descent to get into the spirit of the celebrations by flying the Golden Arrowhead on their cars during the week May 19 – 26, 2019. Persons can also purchase a 53rd Independence Anniversary Tee-shirt for US$10, from any member of the Association. Persons who are interested in securing food booths for May 25 and 26 on the Ball Park should contact SMGA President - Velda Blackett, Tel no. 580-1617, Vice President - Malcolm Mickle, Tel. no. 524-9587 or Treasurer - Mark Daniel, Tel no. 524-9555 as soon as possible.

Guyana, the only English-speaking country on the continent of South America, gained its independence from Great Britain on May 26, 1966. Prior to Britain’s colonization, the country changed hands many times, with the Dutch being the first of a series of European nations to settle on the land in 1616. Evidence of the close to 200 years of Dutch occupation is still evident today in the names of many places, such as New Amsterdam, Uitvlugt, Stabroek Market, Kyk-Over-Al and Fort Zeelandia, the Essequibo River, and Zeeburg. Its capital city, Georgetown, owes much of the architecture, canals, and kokers to Dutch ingenuity.

The colony of Demerara-Essequibo was created on August 13, 1814 when the British combined the two colonies into one. In 1815, the colonies of Essequibo and Demerara were formally ceded to Britain, and 16 years later, in 1831, Berbice, the last of what is known today as the three counties was merged into British Guiana, thereby ending Dutch rule.

British Guiana remained under British control until1966. Four years later, on February 23, 1970, the country became a republic and was formally recognized as the Cooperative Republic of Guyana, having as its first Executive President, the Honorable Linden Forbes Sampson Burnham, who ruled until his death in August 1985.