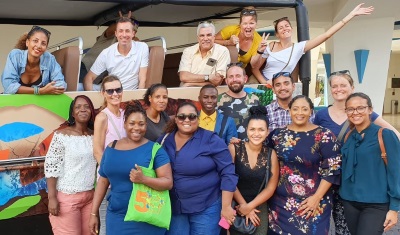 PHILIPSBURG:--- Each year, the Oranje Fonds, the initiator and funder of all the Kingdom DOETs, hosts an evaluation meeting. This is where the organizers of the community service initiatives, such as NLdoet, Aruba DOET, BON DOET, CURA DOET, Statia DOET, and SXM DOET come together to reflect and brainstorm on ways to ensure continuing success for yet another year. This year, the Kingdom was complete as Saba DOET joined in for their first official DOET. The regional meeting was held on May 6th and 7th on Curacao and deemed a success.
“DOET” is the largest volunteer initiative in the Dutch Kingdom where foundations, associations, schools and other NGOs host various projects that need the assistance of volunteers. The event is hosted annually on all Dutch Caribbean islands and in the Netherlands, in early March. In total it attracts about 400.000 volunteers to help accomplish approximately 10.000 projects, spread out all over the Kingdom. The King and Queen, as the Royal Patrons of the fund, as well as Princess Beatrix, always join in on the initiative as well. Locally, you'll see a wide scala of persons participating, thereby being a great community-building event.
During the two-day meeting, there is lots of discussion and dialogue about overcoming common hiccups and how to incorporate new ideas that celebrate volunteerism and the importance of giving back to community-driven organizations.
This year’s meeting also included site visits to some of the projects that were executed during Cura DOET 2019, showing the Kingdom partners the amazing work that their local volunteers were able to achieve, and give ideas and tips to the other Kingdom partners for next years event.
Next year’s SXM DOET will take place on March 13th and 14th, 2019, for it's 6th consecutive year.