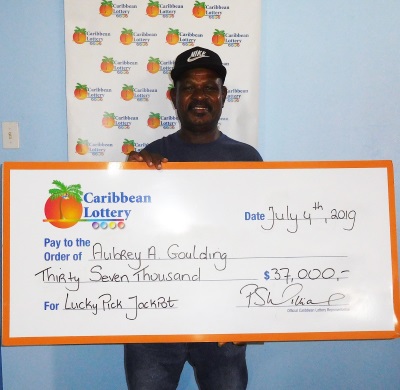 PHILIPSBURG:--- July 8, 2019: There was a broad smile on the face of Mr. Aubrey Golding as he collected his cheque for US$37,000. And who could blame him? He had just won the Lucky Pick jackpot. Mr. Golding purchased his winning ticket at Tackling Shell in Cole Bay, St. Maarten.
For Mr. Golding, it was like any other day when he went down to an agent to check his tickets. “I gave my ticket to the agent who looked at it. With her eyes widening, she told me that I had won the Lucky Pick jackpot and that I should go to the Main Office. So, feeling like a real winner, I went down there.”
“I feel blessed to have this windfall,” chuckled Mr. Golding. “I always believed that one day, I too would be one of the many Lucky Pick jackpot winners that I have seen in the newspaper.” His determination paid off; despite setbacks, he continued playing.
Site Operations Manager at Caribbean Lottery Paula Williams wished Mr. Golding every success. “At Caribbean Lottery, we want our customers to enjoy the thrill of winning,” she commented. “As a regular player, we love Mr. Golding’s belief that he would be successful one day – and now he is a winner!”

Mr. Golding plays at least twice a week, and has been doing so for the past five years. “I encourage everyone to stay in the game, you too can be the next lucky pick jackpot winner. Persistence really pays,” he declared.
For now, Mr. Golding is simply enjoying that winning feeling. “At this present moment, I am just savouring my winnings,” he said. “I have not thought of anything specific to do with it, so I will just put it in my account for now.”