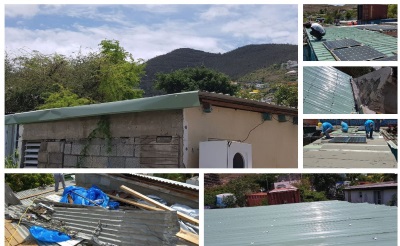 PHILIPSBURG:--- The St. Maarten Tzu Chi Foundation in collaboration with the group of Chinese contractors who had been working at the Sonesta Maho Beach Resort and Casino rolled up their sleeves on their day off on June 7, to assist three families in St. Maarten with critical repair works to their homes.

One of the homes repaired belonged to a single mother and her son, who resides on Dollisson Road. The house was damaged by Hurricane Irma which devastated the island on September 6, 2017. Prior to the repairs, whenever it rained, the mother and her son had to go by friends or family to sleep as the home would be inundated with water. They were unable to repair their roof due to financial constraints. The St. Maarten Tzu Chi Foundation requested permission from the landowner to remove the old zinc sheets and tarpaulin that had been on the roof and replace it with new zinc sheets. A total of four volunteers from the Maho Group used their holiday (Dragon Boat Festival) to assist this family. The volunteers were very grateful for the opportunity given to assist in the St. Maarten community yet again, before they left the island at the end of June.

The second home repaired was located at Fort Willem Hill. A separate group of four Maho contractors assisted to repair the home of a diabetic resident. The resident is unable to work as one of his feet is amputated due to his diabetic condition. Hurricane Irma left his home leaking all over and he too has been unable to conduct repairs due to financial constraints. The owner of the home was very appreciated for the help from the volunteers. The volunteers not only repaired the roof, but they also cleaned up garbage that had been piled up at the resident’s front door.

The third home that was repaired is located on Soualiga Road on Pond Island. The resident for this home lives in a container due to the state of disrepair to his home. The resident is paralyzed from the waist down due to an accident several years ago and is currently in Colombia to treat a condition that he developed from sitting too extensively. His home has no GEBE-powered electricity and the resident uses solar panels to power one light and a refrigerator. A separate group of six Maho Group volunteers helped the diabetic resident to repair the roof of his home.

The families of all three homes that had been repaired are grateful and thankful for the assistance of the volunteers for their kind gestures, hard work and professionalism in repairing their homes and bringing smiles to their faces as the hurricane season has started.

One of the families said it has been two years that she has been suffering in her own home due to the damages sustained during Irma and she is grateful to Tzu Chi and its founder Master Cheng Yen for their assistance in facilitating the repairs to her home.

The resident in the third home said since hurricane Irma went with the roof, he was unable to fix it until the assistance of Tzu Chi and the volunteers for which he is very grateful.

Tzu Chi Commissioner Sandra Cheung expressed sincere gratitude to the volunteers for their benevolence in assisting the families and making them much more comfortable in their homes and the families involved for graciously accepting the assistance.

The volunteers were happy to assist and give back something to St. Maarten, which has been their temporary home for several months as they worked on rebuilding the destroyed Maho Group, which recently reopened. The contractors left the country and returned to their homes at the end of June.