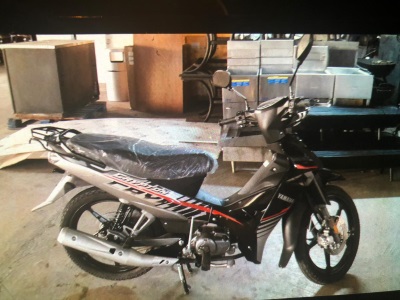 PHILIPSBURG:--- The KPSM Detectives are at this time also investigating a robbery with the use of violence which took place on Monday, July 8th after 08.00 p.m. in the Retreat Estate and Sint Peters area. According to reports, the incident took place while the victim who is a Venezuelan national was on his way home riding his scooter with groceries from a supermarket in the area. He was suddenly attacked by an unknown person who ran out of the dark, wearing black clothing and a hoodie over his head. This person struck the victim to the side of his head at which time he temporarily lost consciousness and control of his scooter and fell to the ground. While regaining consciousness the victim could see an unknown person who started his scooter and drove off with it. Shortly after the victim got up and walked to his home from where the police, detectives, and ambulance were called. The victim was treated on the scene by paramedics. The victim suffered numerous bruises to his head, arms, and legs. He was unable to identify if a weapon was involved. This investigation is ongoing.
The Police Department is informing the community of the ongoing situation in the Sint Peters area. This situation has raised much concern in the community. The police department is warning those youngsters who are involved in these criminal activities to refrain from doing so. This type of behavior shines a negative light on the country Sint Maarten.
The Police Department is also asking the community to share any information they have concerning these ongoing investigations. It is in the benefit of all the community to do its part in helping to solve these cases. If you have any information please call 54-22222 ext. 203/204/ 205, the anonymous tip- live # 9300 or call.