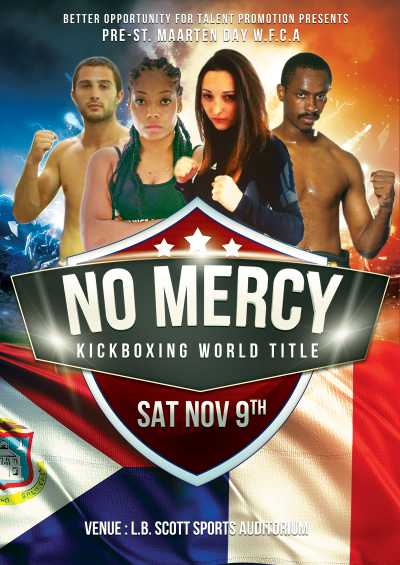 The bouts, which will kick-off at 8.00pm, will feature three of St. Maarten/St. Martin kickboxers competing for one of three World Muay Thai Association World Title Championship (W.M.T.A.) belts.

St. Maarten’s very own Light Heavyweight Kickboxing Champion of the World, Omarie Marsham, who has a professional record of five fights – three wins, two by knockout, with two loses, holding an amateur background record of 11 fights - 10 wins, seven by knockout, one draw and one loss, will be defending his W.M.T.A. World Title belt which he recently won in June.

Marsham will be facing off against the hard hitting Ritchie Siebring Aka “The Hitman” from The Hague, The Netherlands, with a professional record of six fights, three of which are wins – two by knockout and a draw. Siebring has an amateur background of 27 fights – 21 wins and one draw 5-loses.

Also representing the north of the island will be Nicolas Parlanti with a record of 41 fights – 35 wins, nine by knockout and six losses. He will be challenging Lennart Blijd from Suriname, but fighting out of The Netherlands. Blijd has a record of 22 fights – 10 wins, eight of which are by knockout and four losses. This match will be for the Welterweight W.M.T.A. Kickboxing World Tile b belt.

On this card there will be more local C-class and amateur kickboxer’s fights against fighters from around the Caribbean. According to the well-known matchmaker of the amateur category, Marco London, St. Maarten is in for a treat.