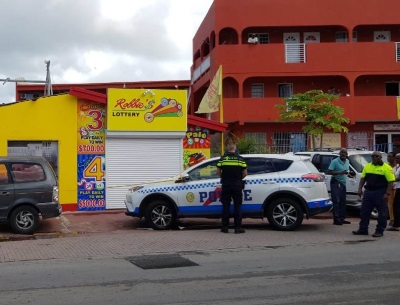 PHILIPSBURG:--- In the early morning on Monday, August 12th a police patrol was sent to the corner of Welfare road Wellington road in Cole bay, behind the lottery-office of Robbie’s Lottery where a man identified with initials R.I. was found hanging from a noose around his neck and was not showing any signs of life. On the scene, the investigating officers did encounter the victim and immediately informed the Emergency dispatch about the situation which seemed to be an apparent suicide. A medical doctor, paramedics, Detectives, and Forensic investigators were also sent to the scene. The doctor pronounced the death of the victim as detectives spoke to potential witnesses and forensic investigators collected evidence.
It is unclear what exactly happened and why. The investigators however at this point in the investigation have not ruled out that foul play. The body of the victim has been confiscated for further investigation. More details of this case are unavailable at this time. As the details become available t5he media will be informed.