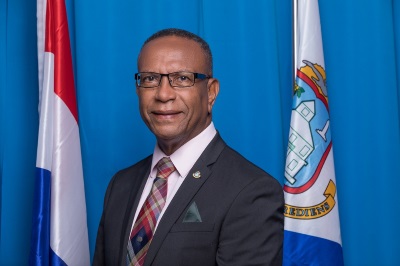 PHILIPSBURG:--- In a recent media publication President of Parliament, MP William Marlin, queried whether the Council of Ministers voted on former Prime Minister Leona Marlin representing the island as a “Private Citizen” at a function being held by the World Bank.
Prime Minister Wycliffe Smith stated, “While I have not officially received any questions or request for information officially from the MP, I would like to quickly set the record clear so that information is factual and not misconstrued in any manner or as the MP stated, assumed in any fashion as well.
According to the Minister of General Affairs, the relevant information and facts are as follows. Former Prime Minister, Leona Romeo-Marlin, was invited to a conference on e-Governance being hosted by the World Bank. The conference is to be held on November 16, 2019 where she would have been a panelist/speaker at this event. She was invited, based on her experience, to share some of what Sint Maarten has done and has envisioned in terms of e-governance. The trip was funded in its entirety by the World Bank itself, and not from the monies of the Trust Fund that they are managing on behalf of the Dutch Government. This meant that Sint Maarten in no way directly or indirectly would have paid for this trip.
According to Smith, “At the time, we were aware of the caretaker status of the Council of Ministers and saw this as no issue so on October 8th, the Council voted and a decision was taken to allow her to attend the November conference. It should be understood that any active minister must have the approval of the Council for travel and engagements that reflect on their role in Government.
PM Smith further explained, “Two days later on October 10th 2019, then PM Romeo-Marlin made another request for her release from the duties as Minister of General Affairs and given her reasons, the decision was taken by the COM to accept the resignations of both Marlin-Romeo and the Minister of Justice, Cornelius de Weever. This decision was based on their request to leave immediately to prevent further political turmoil. As a result of her release from ministerial duties, the approval granted to Mrs Romeo-Marlin to attend the November conference will be retracted. This was noted last week, however due to travels of one minister this could not have been executed. Therefore, upon the return of Minister Geerlings, we will be voting in the next Council of Ministers meeting to retract this decision.”
The retraction is based on the fact that since Mrs Romeo-Marlin is no longer Prime Minister, she has returned to her duties as a civil servant and not just a “Private Citizen” as stated by MP Marlin. With her returning to this status, the procedure for request to travel for the conference is now different. As a civil servant, she is now required to request days, not from the Council of Ministers, but rather from the Secretary General of the Ministry of General Affairs. Mrs Romeo-Marlin has been apprised of this approach and she is busy reporting to and consulting with the Secretary General. A decision is to be made on her vacation request, pertaining to her return to the civil apparatus and her role in the apparatus moving forward.
“I take this opportunity to thank Mrs Leona Romeo-Marlin for her service to this country as Prime Minister and wish her the very best as she moves on,” said Smith.