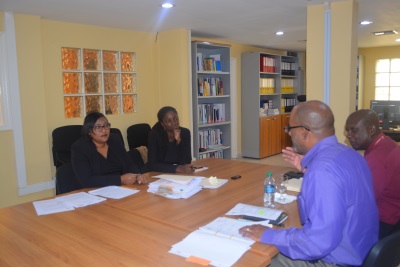 PHILIPSBURG:--- Ombudsman Gwendolien Mossel held a meeting with the Secretary-General of the Ministry of VROMI, Mr. Louis Brown, Acting Head of the Inspectorate Department, Mr. John Davis and Acting Head of the Permits department, Mr. Charlon Pompier, regarding several pending cases concerning the Ministry.
The Ombudsman expressed serious concerns about the lack of responses to requests of the public and the investigations of the Ombudsman, despite several reminders. Currently, the majority of cases concern the departments of Domain Affairs, Inspectorate, and Permits. Government is required to adhere to investigations of the Ombudsman, not doing so is in violation of the National Ordinance of the Ombudsman.
In the extensive meeting, Mr. Brown expounded on the structural deficiencies within several departments pertaining to staffing and budgetary constraints. Despite the department's best efforts, they are unable to respond timely to requests/queries of the public mostly due to these shortcomings. A prioritizing of these structural issues is necessary for the departments to keep up with the demand. The Ombudsman emphasized that the public is not being properly serviced by the Ministry as persons are left in uncertainty. The constant change in Ministers and occasionally the conflicting decisions of the same, also severely challenges the continuity in government. This also requires attention. The Ombudsman made it clear that these challenges in no way exempt the Ministry from its duty to respond.
A meeting with the Secretary General of the Ministry of Justice is scheduled within short to address similar concerns.