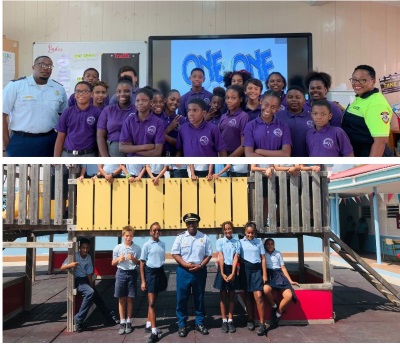 PHILIPSBURG:--- In an ongoing effort to bridge the gap between KPSM and students, under the leadership of the Community Police Officers, the program Cops & Kids is again being implemented into the primary schools for the year 2019/2020.

The presence of the police in the school as a part of the school community indirectly lends to modifying undesirable behavior and opens up valuable lines of communication. The program offers the CPOs a platform to invest in the students of their respective districts.

The first part of the program which is the “One on One” was launched on Tuesday, November 5th and Wednesday, November 6th morning at the Martin Luther King Jr School, Sister Borgia school and the Sister Regina school. The participating CPO’s where Inspectors S. Crispulo, A. Leonard E. Josepha, S.Carty and Officer A Blijden
• “One on one”: students submitted questions to the CPOs regarding the tasks of the Police Department which were addressed and in a presentation at the different schools.