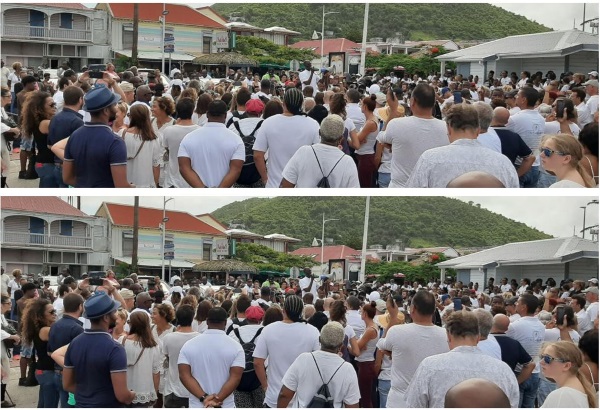 MARIGOT/PHILIPSBURG:--- While it is not common practice that we here at SMN News credit protesters or persons that may cause instability in one way or another we are obliged to recognize the persons that that participated in the protest strike that ended up in a riot on St. Martin against the Plan de Prevention des Risques Naturels. (PPRN).
SMN News does not condone any type of violence and or destruction to properties. The only reason these protesters are being recognized is that they stood together and managed to pull off one of the largest marches on St. Martin.
On December 17th St. Martin and its people showed the world what real unity meant when hundreds of people answered the call of President Daniel Gibbs and members of the Technical Operations Committee (TOC) to gather at the Marigot Waterfront to participate in a peaceful demonstration. Almost everyone that responded to the call of the president including politicians and candidate politicians on the Dutch side wore white clothing as they assemble with their sisters and brothers to denounce the decisions of the State with the PPRN.
The truckers that joined the protest should also be recognized for their participation in getting the attention of the State. These truckers were called upon and many did not expect them to react, but they did on December 17th when they drove around Marigot honking their horns.
It was the first time in decades the people of this friendly island stood together for one common cause. While the fight is ongoing certainly St. Martin and its inhabitants have captured the attention of the State of France and other countries. It was also the first time that the Prime Minister of St. Maarten took a bold stand to fully support her French brothers and sisters by not allowing the French cargo boat to dock at Port St. Maarten. Certainly, the decisions of PM Silveria Jacobs may have repercussions due to international agreements, however, the PM understood what it means to cooperate on a local level.
Twelve days of instability with roadblocks preventing free circulation certainly captured the attention of the French Overseas Minister Annick Girardin who spoke directly to the people of St. Martin via Youth Radio.
The US embassy in Barbados put a warning out, the Anguilla Air & Sea Port Authority also had to use alternative routes when the Marigot Ferry closed off its operations. Several travel sites posted warning as the protest evolved that almost crippled the tourism product.
During the days of the strike businesses on the French side were forced to shut shops, as the owners themselves were not able to get to their place of business.
The roadblocks kicked off on December 11th and it was not until December 24th that the roadblocks were removed in French Quarter and Sandy Ground. The barricades were removed in some areas earlier but not before the French riot team intervened.
Sandy Ground and its people remained unmoved as they demand clear cut answers to their concerns of the PPRN which will affect most of them living along the coastline. Even though the roads were blocked and at times escalated when the Gendarmes intervened and used teargas against the protesters and protesters responded with flare guns. The protest itself was peaceful until some persons decided to take advantage of the situation and began to exploit road users. Hopefully, the next time such a protest is organized should the need arise it is the hope that efforts will be made to limit the abuse and exploitation so that the focus of the action will not be distracted by unwanted attention seekers.
Those that put the actions together made sure they capture the attention of the local government and the French government, even though the outcome may still not be favorable to them organizers of the blockade did strike several nerves.