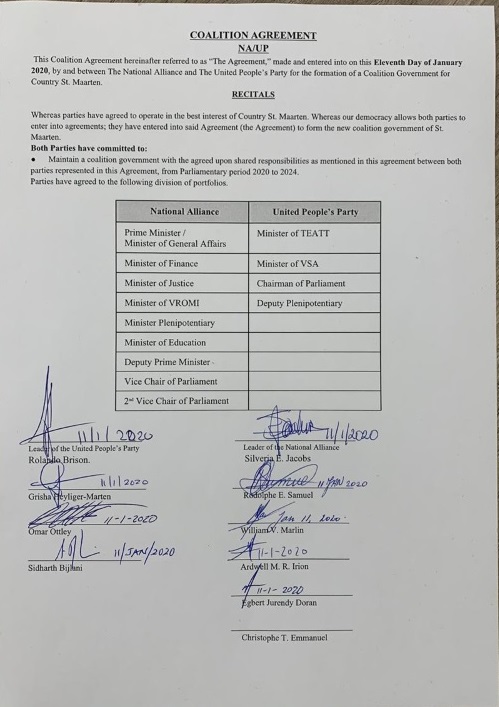 ~Demands were being made for VROMI and USP was his preference. ~

PHILIPSBURG: --- A coalition agreement has been signed with five members of the National Alliance and the United Peoples Party (NA/UP) Saturday afternoon. Those that signed on behalf of the National Alliance are Silveria Jacobs, Ardwell Irion, William Marlin, Rodolphe Samuel, and Egbert Jurendy Doran.
SMN News learned that MP Christopher Emmanuel did not sign the agreement as his preference is to work with the United St. Maarten Peoples Party (USP). The source said that the current coalition does not need the support of MP Emmanuel who showed an unwillingness to work with them and has even threatened to jump ship. 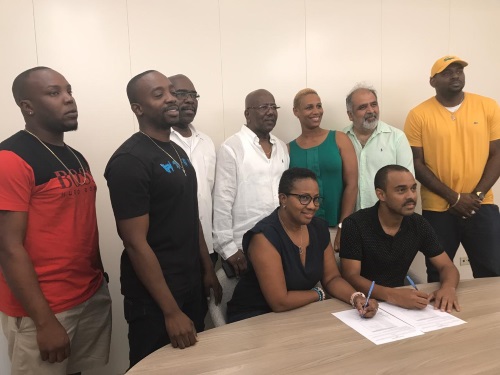 SMN News further learned that Emmanuel wanted the Ministry of VROMI and he preferred working with MP-elect Claudius Buncamper since he has knowledge on the Energy to Waste project Emmanuel was working on while being Minister of VROMI.
The UP faction in parliament gets the Ministry of TEATT, VSA and the chair of parliament, and deputy Minister of Plenipotentiary while the National Alliance will get the Prime Minister, VROMI, Education, the Ministry of Finance and Minister of Plenipotentiary.
Negotiations have been taking place since Thursday night and continued all day on Saturday. Members of the National Alliance also met with MP-elect Claudius Buncamper on Saturday to discuss their options.
According to the information SMN News received is that some members of the NA wanted to work with the Party for Progress Melissa Gumbs and Raeyhon Peterson but that too did not get the approval of Emmanuel since Peterson and Emmanuel are at loggerheads.

In the meantime, supporters of Emmanuel that were interviewed at GEBE and promised jobs are now left in limbo because the MP they supported heavily is not part of the current NA/UPP coalition.

The National Alliance and United People’s Party on Saturday, January 11 signed a coalition agreement to form the next government of St. Maarten. The agreement will see the two largest parties coming out of the January 9 Parliamentary election form a solid majority in the next Parliament of St. Maarten, and, most importantly, a stable government for the next four years.
Under the coalition agreement, the National Alliance will appoint the Minister of General Affairs and Prime Minister, Minister of Finance, Minister of Education, Minister of VROMI, Minister of Justice, Minister Plenipotentiary, Deputy Prime Minister, Vice-Chair of Parliament and 2nd Vice-Chair of Parliament.
The United People Party will appoint the Minister of TEATT, Minister of VSA, Chairperson of Parliament and Deputy Minister Plenipotentiary.
Prime Minister and leader of the National Alliance Silveria Jacobs said in no uncertain terms that the NA/UP coalition government reflects the wishes of the people as they have been clamoring over the past years for the two largest parties to come together.
“The National Alliance campaigned strongly on stability and providing leadership of integrity and honesty. Therefore it is from this premise that we expect, with our coalition partner, to work consistently, cohesively and collaboratively in the interest of the people of St. Maarten,” the PM said, adding that the recovery of the country and re-instilling trust in the government of St. Maarten are key priorities for the coalition. “Our people expect stability and good governance. This coalition, formed by the people, intends to give them just that,” the PM said.
Leader of the UP MP Rolando Brison said the main goal championed throughout the campaign after so many years of instability was a strong, stable government that will focus and work to improve the quality of life of the people of St. Maarten by tackling pending issues on the Executive level and passing legislation in Parliament. “We believe this coalition agreement between the National Alliance and UP gives our country a stable government that understands that at this point in our history we must get this right for our people. We must above all put them first and that starts with stable, serious governing,” Brison said.