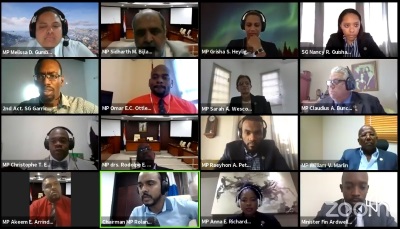 PHILIPSBURG:--- The Parliament of St. Maarten on Monday became the first Parliament body in the history of the Kingdom of the Netherlands to digitally vote on a law. President of Parliament MP Rolando Brison (UP) chaired the historic meeting on Monday which focused on an amendment to the UTS shares sales initiative law which he initiated last year.
With all MP’s adhering to social distancing directives in the wake of the Coronavirus pandemic, Parliament meetings will now be held via video/remote conferencing until further notice. Each MP, complete with personalized backdrops, participated in the meeting from his or her location from home or a private office.
The law amendment voted on unanimously by Parliament, allows the adjustment of the maximum price of the shares sale which in turn allows Minister of Finance Ardwell Irion to collect the second half of the payment from the sales. The first half was already received by St. Maarten late last year. Irion was also present on the remote conference from his location in the Government Administration Building.
MP Brison said with the law passing, government will be able to collect millions of guilders from the remainder of the sale of UTS shares. “The timing of this could not be better, as government needs every guilder it can get to drive us through the tough times that are undoubtedly ahead. Minister Irion indicated the payment would go directly into the liquidity which is already being used for (Covid 19) recovery.”