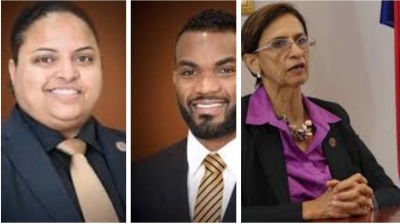 PHILIPSBURG: --- The meeting of parliament called to discuss the reconstruction of the Princess Juliana International Airport and the resignation of the Dutch appointed Chief Financial Officer (CFO) of PJIAE ended abruptly on Wednesday when the members of parliament representing the Party for Progress Melissa Gumbs and Raeyhon Peterson left parliament abruptly without informing the chair.
The Parliament of St. Maarten is lacking four MPs since they resigned to take up Ministerial posts in Government.
On Wednesday morning the credentials of the incoming members of parliament were vetted and they will soon be sworn in.
However, St. Maarten like the rest of the world is on lockdown and Members of Parliament are also on lockdown and are currently working remotely from their homes. While St. Maarten workers stand to lose their jobs, some may not have a roof over their heads or meals on their tables with the current crisis Members of Parliament will be enjoying their full salaries, yet the two members of the PFP chose to abscond their duties and to begin playing politics at a time when the people of St. Maarten needs their elected representatives.
Also leaving the meeting was MP Sarah Wescot Williams a veteran in the political field, Williams like many others are working from home and the country is under lockdown yet she indicated to parliament that she was leaving early.’
The second agenda point for the meeting was about the Dutch appointed Chief Financial Officer Gerban Stevast who quit his position and returned to the Netherlands. Stevast informed management of PJIAE last 2019 that he would resign for personal reasons since then a new candidate have been selected and is currently working at PJIAE as a financial advisor.
Members of Parliament asked the Prime Minister and CEO of PJIAE to provide answers as to reason Stevast left and the reason why he left. They also asked the CEO Brian Mingo if he was directly involved in the selection of the current candidate. While Mingo provided some answers to Parliament, two members of parliament namely MP Claudius Buncamper and MP Christophe Emmanuel asked the CEO through the chair to provide specific answers to their questions since according to them their questions were not answered.
It was when the meeting resumed the chair of parliament realized that three of the MPS that sat through the meeting left and leaving them no choice but to close the gathering due to the lack of a quorum. The meeting will be rescheduled next week.