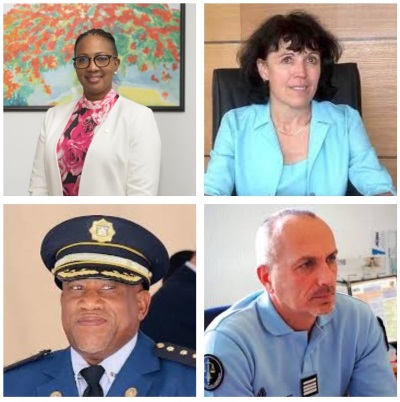 PHILIPSBURG/ MARIGOT:--- The French side represented by Prefet Sylvie Feucher, President Daniel Gibbs and Commandant of the Gendarmerie Stephan Basso confirmed during a live press conference on Sunday with Prime Minister Silveria Jacobs that the French side of the island has decided to respect the decision of the Prime Minister of St. Maarten Silveria Jacobs when she declared the State of Emergency on Saturday.
Prefet Sylvie Feucher said that the border at Bellevue and Belle Plain (Belvedere) will be manned by joint forces 24 hours during the countrywide shutdown. The border at Oyster Pond and in Low-Lands will be physically closed. Feucher said that this is done to further protect the citizens on both sides of the island. She said that reinforcement of gendarmes arrived on the island on Saturday which will assist the Gendarmerie. Feucher said that due to the lack of manpower a decision was taken to physically close the border and at Oyster Pond and Lowlands. Feucher said residents who have urgent needs to cross the border must obtain an attestation from the Prefecture. These attestations will only be given for emergency and essential services. Persons are not allowed to cross the border of leisure purposes.
President Daniel Gibbs who called in by phone confirmed the statements made by Prefet Feucher, while the Commandant of the Gendarmerie Stephan Basso said that the plans to further re-enforced the borders were done in conjunction with their counterpart of KPSM. He said during this period the Gendarmes will also reinforce the measures implemented on the French side since March 17th, 2020. Basso said that some residents have been lapsing and as such fines will be issued. The Commandant of the Gendarmerie also pleaded with the community to respect the measures that were put in place for everyone’s safety.
Asked if the French side will be delivering food to the vulnerable and elderly during this period. Gibbs said that the French side is already delivering food to those people. He said meals are being prepared by CTOS and some associations just recently joined forces with the Collectivity and CTOS to deliver food.
Media personalities that have the Disaster Pass issued by DCOMM will be allowed to cross the border strictly to cover the news. Those media personality that does not have the Disaster Pass should ensure they obtain an authorized form from the Prefecture or the Chief of Police Carl John. Emails can be sent to Chief of Police Carl John at This email address is being protected from spambots. You need JavaScript enabled to view it.
Prime Minister Silveria Jacobs urged the residents on both sides to respect the restrictions as it is for everyone’s safety. She said the borders are not closed but at the moment it will be manned to reduce the movement of people.
Head of CPS Fenna Arnell also announced that the emergency supplied that are provided by the Netherlands arrived on the island today (Sunday). She said the 12 beds that are complete with ventilators were delivered to the St. Maarten Medical Center.
Epidemiologist Eva de Weever said test kits are limited and that persons who develop symptoms while in confinement will be tested. She said at the moment there are not sufficient kits to test everyone. De Weever said that St. Maarten is following international regulations to curb the spread of COVID-19. She said the best way to control and protect each other is social distancing and right now everyone should stay home.
During this shutdown, no physical activities will be allowed outside of anyone’s home or yards. Persons that have pets and do not have space to accommodate their pets' daily needs will be allowed to take their pets outside of their homes but this must be done in close proximity to their homes.
Employees that were not paid by their employers and have an urgent need for food should fill in a form on the Government website or Facebook page in order to receive assistance from the government. Jacobs said everyone that is vulnerable including the undocumented.