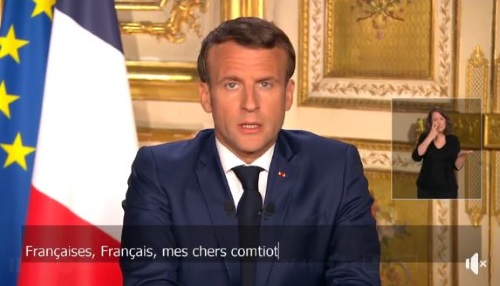 PARIS:--- French President Emmanuel Macron in his 3rd address to the nation since the outbreak of COVID-19 said France will remain locked down until at least May 11, President Emmanuel Macron called on its citizens to continue to respect the rules his government has imposed to slow the spread of coronavirus.
Macron announced the lockdown extension during a public address on Monday as the growth of the epidemic in France was appearing to a high level, with 574 new deaths declared in the preceding 24 hours.
Macron admitted the country had not been prepared for the outbreak, nevertheless praised those in front-line occupations for working overtime to save lives and called on the French to continue to stay home and maintain social distancing. Economic assistance would be stepped up for workers in those sectors that had to remain closed, he added, promising a specific plan for the tourism, hotels, restaurant, and culture sectors.
Macron pledged that May 11 would represent “the beginning of a new step,” after which schools, daycares, and other educational institutions would be progressively reopened.
France has been locked down since mid-March and has a total of 133,685 confirmed cases of coronavirus, ranking behind only the US, Spain, and Italy in terms of casualties. Almost 15,000 people have died with the disease, though the death rate among hospitalized patients has slowed over the weekend and the number of patients being treated in intensive care has declined for several days.