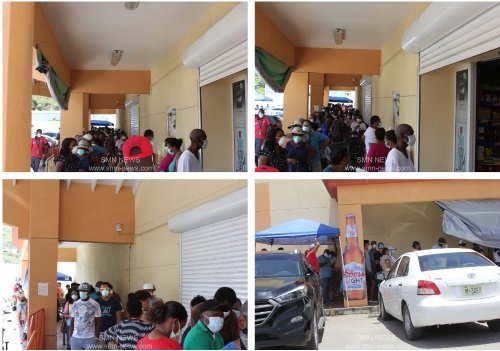 PHILIPSBURG:--- The opening of supermarkets on Thursday can be considered a recipe for disaster as shoppers have not been adhering to the guidelines set forth by the government when it comes to social distancing.
The smaller Chinese Supermarkets took several measures to ensure persons shopping at their supermarkets wore a mask, some of them have security guards at the entrance spraying alcohol on the hands of the shoppers before they enter the supermarkets. One supermarket in Dutch Quarter even distributed gloves to their customers.
Another supermarket in St. Peters barred all shoppers from entering their supermarket while the owners of that supermarket served their customers outside, even the bags are packed by the owners of that supermarket. Clearly, the owners of this particular supermarket understand the need to keep their customers and their family members safe.
However, the situation at Sunny Foods on AT Illidge Road is nothing but a recipe for disaster as no measures have been taken to implement social distancing. While management of Sunny Foods placed tents alongside the walls of the supermarket, customers could be seen almost under each other with absolutely no fear of either catching the coronavirus or even spreading it. The pleas by Prime Minister Silveria Jacobs certainly went on deaf ears. Also not visible were police presence or anyone from the Inspectorate of Health or Economic Affairs.
Long queues can be seen at Cost U Less as people decided that they will shop today at all cost, the same situation, Carrefour while Prime in Cole Bay was packed. The parking lot was filled with cars while a long line of people queued up to get in. Econo Supermarket also had a long line of people outside of their supermarket.
Based on the behavior displayed on Thursday Prime Minister Silveria Jacobs along with the EOC will have to come up with other stringent measures that would carry consequences if St. Maarten really wants to get a grip on the spread of COVID-19. It might be best to allow everyone to shop in their district, by streets until the curve is flattened.

Traffic on Thursday appeared to business as usual as in some areas there was bumper to bumper traffic. An accident also occurred on Link 1 blocking the flow of traffic for a long period of time.
Hopefully, the EOC along with the Minister of Justice Anna Richardson would take the necessary precautions to properly utilize the justice workers to bring about some type of order when these supermarkets are allowed to open their doors.