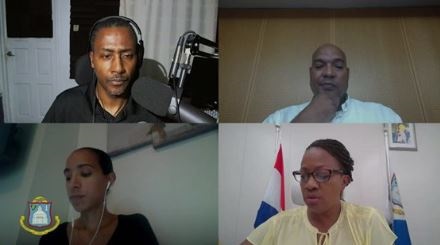 PHILIPSBURG:--- The EOC and Prime Minister Silveria Jacobs is satisfied with the reaction of the St. Maarten community who were given the opportunity to shop on Thursday and Friday as the lockdown continues for the next three weeks.
Prime Minister Jacobs in response to a questioned by SMN News said that St. Maarten already spent over NAF2.4 million at CPS that is busy with the testing and monitoring of COVID-19 patients. Jacobs also said that she did not have the final figure as to how much government spent already, but admitted that the amount is in the millions since the government of St. Maarten covered the expenses of the hospitainer at the St. Maarten Medical Center (SMMC).
At moment SMMC got 30 persons from AMI in the United States assisting with the COVID-19 patients, while CPS has four persons that came in from the Netherlands to assist them, they are two public health nurses and a hygiene specialist.
Jacobs said that the crowd was indeed large during the morning hours of both days and that the social distancing was acceptable. The EOC admitted that there were a few places where shoppers and the owners of the supermarkets did not adhere to social distancing.
Jacobs said the week has been heavy and also long for the front liners, she said while the shutdown continues supermarkets, banks, gas stations, fisheries and agriculturist, health stores, and other essential services will open at least 3 days per week to continue selling basic necessities to the residents of St. Maarten. Deliveries will also continue to take place throughout the lockdown.
Shoppers are advised to shop once a week and only one person per household should be going to supermarkets while shoppers should wear facial protective gear such as a mask. Senior citizens, pregnant women and the disabled will be given preference at the supermarkets, especially during the first hour.
Head of CPS Eva Lista de Weever said that there are currently 64 confirmed cases on St. Maarten and it is expected that the number will continue to rise as the CPS team with including the local volunteers will continue testing in the various districts. De Weever said that many persons that CPS reached were not keen in taking the tests, she said the information collected by CPS will not be shared with anyone outside of CPS, therefore persons that are having influenza-like symptoms should not hesitate to contact CPS at 914, De Weever also said that the testing conducted by CPS is free of charge.
Fenna Arnell said that SMMC capacity will increase this weekend while the hospitainer will also be operational by this weekend. Arnell further explained that the White and Yellow Cross have decided to assist by accepting patients from the SMMC that only needs nursing care this she said was done to further create space at the medical institution.
Arnell called on persons wearing masks to ensure they wear them correctly by following procedures not to contaminate the masks while putting them on or removing them.

Joy Arnell of the Department of Social Affairs said that they are continuing with their community outreach program and that last week 1,500 care packages were distributed. She said the department received more items these past two days and they are busy packaging another 1,500 care packages for distribution in the coming days.
Miguel de Weever Secretary-General of the Ministry of TEATT said his department has tightened up with controls and businesses that are not considered as essential services will be closed and issued with fines if they open. De Weever said on Thursday one cosmetic store was closed and fined for opening for business while they were not authorized to do so.
Asked if the Department of Economic Affairs will be conducting controls and issue fines to businesses that are not complying with the guidelines, De Weever said they have not issued fined to any supermarket but they have assisted by asking persons to maintain the social distancing.