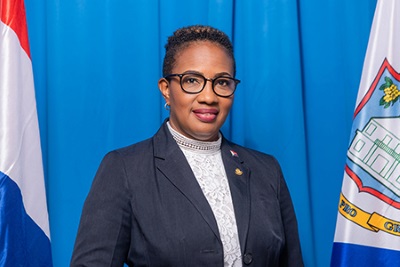 PHILIPSBURG:--- Prime Minister and Chair of the Emergency Operations Center (EOC) Silveria Jacobs hereby updates the general public for today, Monday, April 21, 2020, as part of the process to keep the community of St. Maarten informed about the latest developments and the Government’s COVID-19 containment, mitigation and response measures.

Based on the latest available data, as updated by CPS Epidemiologist Eva Lista-de Weever, the counts for April 21, 2020 as of 5:00 PM are as follows:

As of today, April 21, 2020, SMMC currently has 9 COVID-19 suspected or confirmed patients admitted. Of the 9 patients, 2 are currently in the ICU and 2 are in care level 3/4 and in the Mobile Medical Pavilion. Today, SMMC also received a shipment of five ventilators from the Dutch Ministry of Public Health, Welfare and Sports. The Government of St. Maarten is thankful for the grant of the ventilators provided for St. Maarten. Prime Minister Jacobs will update during the Council of Ministers press briefing on the details hereof.

This morning, Prime Minister Jacobs had an opportunity to express her gratitude for the assistance provided during the weekly ministerial consultation with the Ministers of Health within the Dutch Kingdom. The Ministers gave updates on the current epidemiological and announced their intentions to look into de-escalating measures to return to some sort of normalcy and restart their economies.

The meeting ended on a rather positive note as St. Maarten got confirmation that the 600 COVID-19 test kits that were delayed for a week due to logistical issues would be arriving this week, ensuring that CPS can continue to conduct their community outreach campaign for COVID-19 testing.

This afternoon, Prime Minister Jacobs also held a strategic meeting with ESFs 5, 6, 7, 9, 10 and the Ministers of Justice, TEATT and VROMI in his capacity as Deputy Prime Minister. The Minister of VSA was unable to attend due to a scheduled Parliamentary meeting. ESF 6 coordinator for Public Health Fenna Arnell, gave updates in regard to Collective Prevention Services (CPS) community outreach campaign for COVID-19 testing. Reportedly, over 600 persons in more than 200 households were contacted in 3 districts, of which 9 were confirmed as showing symptoms and 6 were tested. CPS is however, concerned after evaluation of the numbers, that there may be a stigma in the community preventing persons from signaling if they have symptoms. Prime Minister Jacobs reminds all that there is absolutely no shame in knowing your status, as this is the only way to mitigate the spread of the virus. “Knowledge is power, proper hygiene and isolation once identified as positive, and properly medicated to avoid severe symptoms that may be life threatening could save your own life,” Jacobs stated.

Prime Minister Jacobs further stated, “Proposals will be made to the EOC in the upcoming meetings this week as we continue to assess the effect of measures taken as well as CPS’s ability to carry out the necessary community outreach, testing, and mitigation of the spread of the virus on the ground.”

ESF 7 coordinator for Social Services and Community Development, Joy Arnell, reported that she had a fruitful meeting with the six organizations and NGOs that are out in the community delivering food as well as with the seven community councils and leaders. The delivery list was streamed lined by the organization, and the number of persons needing assistance with food has been brought down to about 3000. The food packages are also currently being packed and will be ready for distribution by Thursday, and will continue through Saturday, Sunday in collaboration with the Community Leaders.

ESF 5 coordinator Police Chief Carl John reported that compliance by the general public is still going well and commends the public for their behavior. The Chief also reported that 177 fines were issued for non-compliance with measures implemented to mitigate the spread of COVID-19. Some challenges did occur with the controls of the 2 zones, however as the days progress and people become accustomed, this will improve.

ESF 10 coordinator and Secretary General of TEATT, Miguel de Weever reported that on Monday, despite the fact that the banks in Zone A were not open, causing more work for Police at control points, everything else went smoothly with the businesses that were open and delivery services continued. Additionally, discussions are being had with the Harbour and Airport regarding the plan to re-open St. Maarten for returning residents and visitors, and how this can be facilitated while safeguarding the safety of residents of St. Maarten as well as future returning and visiting tourists.

Discussions also started related to the public holidays scheduled for next week, however, the decision will be made after further legal advice has been sought as to how to resolve it within the constraints of the current State of Emergency and its scheduled business openings, so that the employees still have an opportunity to rest and recover during the holidays.