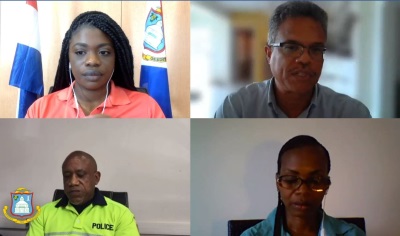 ~Frontline workers and seniors will be allowed to pay bills this week at GEBE.~

PHILIPSBURG:--- The EOC has decided to extend the shutdown on St. Maarten for another week, Chair of the EOC and Prime Minister Silveria Jacobs said that even though some measures were lifted EOC feels that since the lockdown the curve on COVID-19 is flattening and such they need more time to conduct further testing and further flatten the curve. With the one-week extension St. Maarten will then be shut-down for a period of six weeks, Jacobs said on May 17th.
EOC has also decided as of this week residents will be allowed to exercise in their districts in the morning from 6 am to 8 am and in the evening from 4 pm to 6 pm. Residents will be allowed to exercise only on the days when they are allowed circulation of people, those residents who chose to step out to exercise will be allowed to walk, jogging, and biking.
Jacobs further explained that the St. Maarten Medical Center (SMMC) reported a drop in admissions since the lockdown and that health officials are getting the result they are looking for during this health crisis.
SMN News asked Inspector General, Dr. Earl Best if the Inspectorate is participating in the controls at business establishments to ensure businesses that are allowed to open their doors abide by the social distancing measures, Best said that the Inspectorate is not tasked with ensuring health measures are respected. He admitted that the Inspectorate is collaborating with the Department with Economic Affairs when they are conducting controls. Best also urged residents to ensure they follow all hygiene measures such as hand washing when in public. He said even when the lockdown is lifted residents must continue to maintain proper social distancing and proper hygiene to further mitigate the spread of COVID-19.
Currently, there are 76 confirmed positive cases, 7 persons hospitalized, with 19 active cases, with 13 deceased. CPS is calling on residents to come forward for testing and to also continue to practice social distancing. Jacobs said that while testing continues on St. Maarten there is no longer the need to send tests to Guadeloupe for analysis.
Chantal Groeneveldt called on residents that applied for social assistance in the form of food boxes to stay at home especially on the days when the lockdown is in effect to receive the boxes when they are being delivered. Groeneveld said this week's food boxes will be delivered in the Dutch Quarter, Garden of Eden, Middle Region areas.
Chief Executive Officer (CEO) of GEBE Kenrick Chittick in his announcement said that GEBE will not be disconnecting any of their clients. He urged residents to begin paying their utility bills through online banking since it is very efficient. Chittick said that GEBE will be catering to frontline workers and seniors next week when they open their offices for collections.
Secretary-General of the Ministry of Economic Affairs Miguel de Weever said that his Ministry is busy working with the Bus Drivers Association to reach an agreement on public transportation. De Weever said that whenever an agreement is reached on the conditions under which buses will be allowed to operate then an announcement will be made by the Prime Minister.
Chief of Police Carl John said that police confiscated three stolen vehicles on the Dutch side of the island during the lockdown period, he said the French and Dutch law enforcement are working closely as they address the spike in car theft on the island. John said that police also confiscated 4 illegal firearms.
In the meantime, while the lockdown is extended to May 17th the French side is expected to lift some measures on May 11th, 2020 as announced by President Emmanuel Macron. The French are also expected to begin mass testing in some areas next week which will be used to determine the decisions that will be made on May 11th.