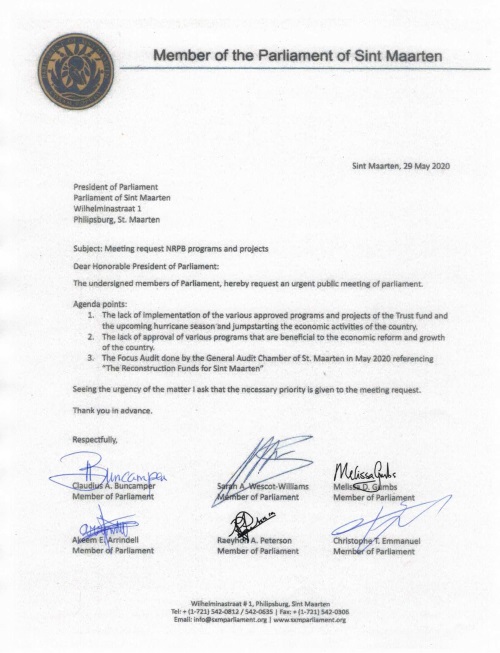 PHILIPSBURG:--- On Friday, May 29th, 2020 Member of Parliament Claudius Buncamper sent an email to the President of Parliament MP Rolando Brison
requesting an urgent meeting regarding the still pending NRPB programs and projects.
The email suggests that it is imperative that the Prime Minister is invited to the meeting, accompanied by the NRPB directorate and
any other support staff desired by the prime minister.
MP Buncamper's request was supported by MP Akeem Arrindell (USP),
MP Sarah Wescot-Williams (UD), MP Melissa Gumbs (PFP), MP Raeyhon Peterson (PFP),
and MP Christophe Emmanuel (NA).
The meeting serves to allow the Prime Minister and her support staff to provide an update on a number of pending issues,
such as the various approved projects and programs of the trust fund that are yet to be implemented,
the upcoming 2020 Atlantic Hurricane season which officially starts on June 1st and jump starting the country's economy.
The agenda points allow also for clarification on the lack of approval of a number of programs that are beneficial to the economic growth of the country,
while emphasis is placed also on the Focus Audit which was done by the General Audit Chamber of St. Maarten in May referencing
"The Reconstruction Funds for St. Maarten".