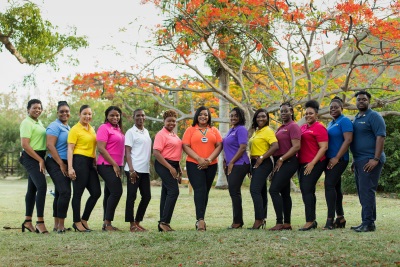 The keynote speaker was none other than the dynamic, courageous, phenomenal first female club president in Rotary’s history, Dr. Sylvia Whitlock. Dr. Whitlock inspired the virtual crowd with her speech based on the journey women took to become Rotarians and how she managed to attain the title of the presidency. She went in-depth to explain the importance of wearing the Rotary pin. She even encouraged members to wear their pin on their pajamas. She concluded by encouraging members to focus on inviting new generations to join Rotary.

Immediate Past President Jaida Nisbett proudly gave notice and recognition to the hard work and dedication of all members. Following this acknowledgment, she particularly gave a distinction in recognizing members who displayed an outstanding amount of effort and commitment with the President’s Awards in areas that included fellowship, service above self, board member of the year, and Rotarian of the year. The recipients respectively were Rotarians Lionel Lawrence, Franjesca Bulbaai, Ahisha Nunes, and Michelette Boasman. Rotarian Michelette also received the Paul Harris recognition for her selfless service to the club, the community, and ensuring the club surpassed its goal in giving to the Rotary Foundation.

Past District Governor Haresh Ramchandani installed President-Elect Elisia Lake, whilst Immediate Past President Jaida Nisbett pinned her. President-Elect Elisia Lake delivered a sound address encouraging members to remain focused and committed to serving humanity. The incoming board members proudly pinned themselves in the comfort of their homes while participants cheered them on. The 2020-2021 board members of the Rotary Club of St. Martin Sunset include: