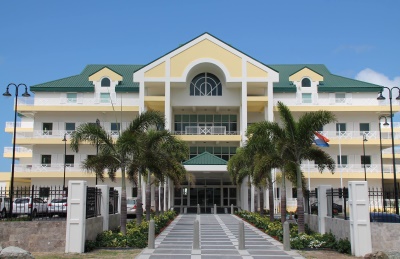 PHILIPSBURG:--- Twenty-four hours after receiving the long-awaited documentation concerning the “New Entity” proposed by the Dutch Government, the Council of Ministers, in its meeting of today, unanimously agreed that the proposed Consensus Kingdom Law and other relevant documents related to the entity are unacceptable as presented. This comes, a mere four days before Aruba, Curacao, and St. Maarten are required to make a political commitment to accept the conditions for the 3rd Tranche of COVID-19 liquidity support in the extra Kingdom Council of Ministers meeting to be held on July 10. The confidential manner in which this documentation for the entity has been shared with the countries is also unacceptable as it circumvents the Parliament and binds the hands of the Government from having an open and transparent dialogue on this topic.

“The entity goes against the constitution and the will of the people to govern their own affairs. The Dutch Government, in an indirect way, is pushing a longstanding agenda while St. Maarten is currently under duress. Once again, we see a repeat of 2017, whereby, unreasonable conditions are being attached to a much-needed loan as a result of a disaster,” Prime Minister Silveria Jacobs said.

The entity proposed by the Dutch, to be established based on a Consensus Kingdom Law requires all countries in the Dutch Kingdom to agree after much dialogue and coming to agreements together. This has most definitely not occurred during the process of creating this law over the past 8 weeks. Considering the far-reaching power to be allotted to this entity, such grave decision needs to be properly weighed and therefore, the time given to accept this proposal is very unrealistic. Consultations must be held with different entities such as Parliament, Council of Advice, the Ombudsman, social and economic stakeholders among others before a final decision is made. The Council of Ministers has decided to request a postponement in order to receive proper internal advice and dialogue with key internal stakeholders, as well as seek alternative options.

The Government of St. Maarten has serious reservations regarding the link of non-financial conditions, for COVID-19 liquidity support which is a loan. The government also largely believes that by including the stipulated conditions, the Netherlands is underhandedly imposing policy and political measures on the government of St. Maarten, outside its powers, at a time when the country and its people are in need due to the economic downturn experienced around the world. In addition, attaching such financial support to the approval and recording of laws and regulations, the Parliament of St. Maarten is forced to adopt legislation within a short period of time and prevents the Parliament from exercising its full mandate.

“St. Maarten remains in constant dialogue with our colleagues in Aruba and Curacao regarding our response to this oppressive enforcement of a Consensus Kingdom Law by the Dutch without having followed the proper constitutional procedures. This renders the proposal devoid of good governance, decency and further violates our democratic and autonomous rights within the Kingdom, especially in return for a disaster loan,” concluded Prime Minister Jacobs.

Prime Minister Silveria Jacobs who is currently reporting to Parliament said that the Kingdom Council of Ministers has denied St. Maarten's request for a postponement. Jacobs said the proposed law to establish the entity that will be established to govern St. Maarten, Curacao and Aruba will be handled on Friday. However, Jacobs maintained that the government of St. Maarten will maintain its position of being against the establishment of the Caribbean Reform Entity.