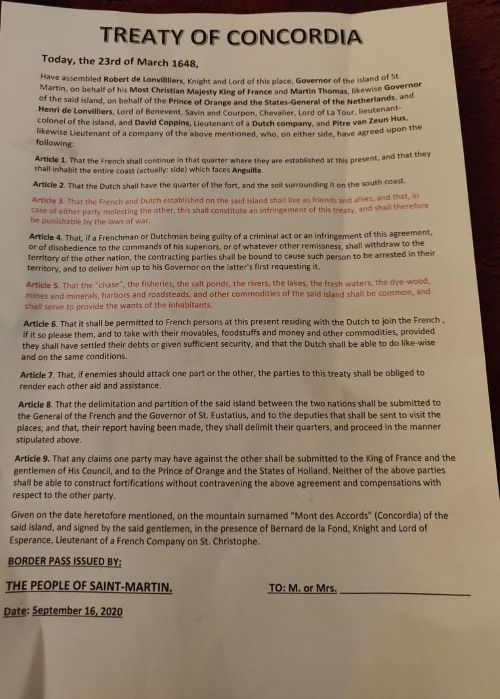 ~ Businesses asked to close in solidarity of protest.~

MARIGOT:--- Members of the Souliga United Movement (SUM) and several other organizations announced on Tuesday at a press conference that they will begin a peaceful protest on Wednesday morning against the border controls that have been extended until October 1st, 2020 by the Préfet Délégué Sylvie Feucher.
The group of activists called on everyone residing on St. Maarten/ St. Martin to join forces to protest the division of people and unity that has been orchestrated by the State. Persons are asked to use whatever means of transportation they have joined the protest action which will begin at the Cole Bay Round About to Bellevue checkpoint and from Agrement Round About for a meet up at the Bellevue checkpoint. The protest action starts at 7:30 am. Persons from the French Quarter are also asked to join the protest which would at some point be at the Belle Plaine checkpoint.

Businesses on both sides are called upon to close down for a few hours in solidarity with the organizers of the march. Teachers and Teachers Unions are also asked to close the doors of their classrooms since they are unable to close the schools.
Victor Paines member of the SUM said that they will start off the motorcade protest peacefully to avoid being accused of having a large gathering that would increase the spread of COVID-19. Paines call on everyone to walk with drinking water as well as their masks and hand sanitizer.
Protesters will be given a copy of the Treaty of Concordia to use as their pass when they approach the checkpoints on Wednesday.
Paines further explained that there is sufficient data to show that the border controls have not in any way assisted in decreasing the spread of the coronavirus but in fact it serves to divide people, unity, and families that have lived for over 300 years peacefully. He said currently there are more cases of coronavirus on the French side as there are on the Dutch side. Paines further stated that those handling the disease are not doing a proper job because proper contact tracing is not being done while no one monitors people that are in quarantine.
Sujah Reiph who also spoke said that on Wednesday that there is no guarantee the peaceful protest will end peacefully and how long the protest action will last. He said that at all costs the border checks must be removed on Wednesday as calls have been made to Préfet Délégué Sylvie Feucher to repeal the decision to keep the checkpoints until October 1st, 2020. At some point, the Unity Flag will be raised and placed on existing flag poles as the protest action is a joint one.
Among the group on Tuesday was Clara Reyes Head of the Culture Department on St. Maarten who also said that the checkpoints do not serve its purpose and in fact, it is hindering the peaceful and harmonious life that co-existed on St. Maarten for more than 300 years.
Condemning the decisions taken by the State representative was the Director of the Chamber of Commerce Angele Dormoy who lamented on the state of the economy. Dormoy said the Prefet is not taking the social impact the border controls have on the economy and the people of St. Martin and St. Maarten. She said St. Martin does not need the border checks because it was not needed post-IRMA or even in December when the people protested the PPRN.
Member of the Territorial Council and founding member of the SUM Jules Charville was also present at the press conference. Charvile said Feucher does not listen to anyone that just on Tuesday Senator Guillaume Arnell spoke out against the actions taken by the Préfet Délégué.