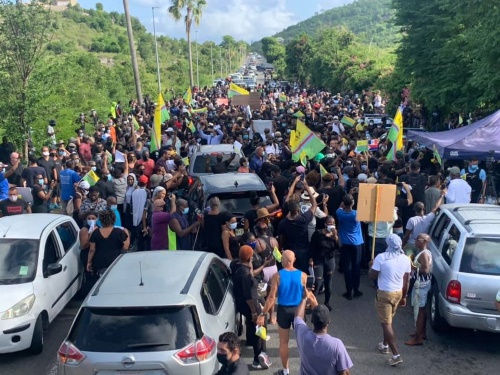 ~checkpoint dismantled, as marchers looked on, checkpoints will remain in place, no deal says Ministry of Overseas Affairs.~

PHILIPSBURG/MARIGOT:--- Hundreds of people most of them wearing black clothing marched on Wednesday morning as they protest against the border controls that are manned by the Gendarmes and Police Aux Frontiers.
The march which was organized by the Soualiga United Movement and supported by several other nongovernmental organizations and Foundations saw a large number of people marching against the checkpoints that have been destroying the economic activity on both sides at the island.
Politicians from both sides of the island joined the protesters. Several Members of Parliament from St. Maarten and President of the Collectivity Daniel Gibbs were among the marchers. Among them were members of the Territorial Council such as Louis Mussington. Mussington said that everything placed on the roadways must be removed today Wednesday, September 16th, 2020. Mussington said that if the barricades are not removed then the State authorities will see the wrath of the people as they have had enough. Lenny Mussington in his address to the crowd said the Préfet Délégué Sylvie Feucher has her knees on St. Martin's neck and if she continues they will all die like George Floyd. Mussington said that St. Martin wants to breathe and as such Feucher must take her knees off the neck of the people. He made clear that St. Martiners don't want to die this way. Mussington said that when someone says they are doing everything to protect you is the mentality of a dictator. One thing that is clear is the marchers will remain at the Bellevue border until they get definite word from the Préfet Délégué that the checkpoints will be removed today and there will never be checkpoints again on St. Martin.

Shortly after 9 am the Gendarmes were seen on live video feed dismantling the tents at the checkpoints and placing their barricades on the roadside. They later said that they removed the tents to ensure the safety of the gendarmes. They made clear that the border controls were not lifted and will continue until orders are given to them to permanently remove the checkpoints.

Moments ago it was announced by Territorial Councilor Jules Charville announced that a message was sent to them from the cabinet of the Minister of Overseas Affairs that states that there is no deal and that the checkpoints will remain in place. Charville said that the protesters were trying to remain peaceful but it appears as though the French want disruption such as burning. Charville who is the founding member of the Soualiga United Movement said that phase 2 of the march will be coming.

The protesters were overheard saying that all checkpoints must be removed. They want the checkpoint in Bellevue, and French Quarter (Belle Plaine) cleared while the container in Oyster Pond and Low Lands removed.
It was announced that the Minister of Overseas Affairs gave orders to remove the checkpoint due to the protest action that is still ongoing.
The intention of the protest was to hold a motorcade but instead, the people mobilized and marched towards the checkpoints that are located on the Bellevue main road.
The protesters and organizers of the march also raised the Unity Flag at the border points.