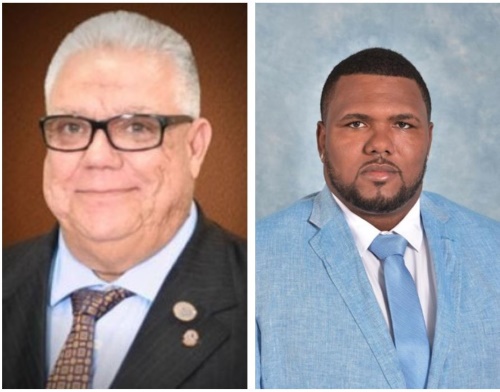 ~Say the laws have to be reviewed.~

PHILIPSBURG:--- Members of Parliament of the United St. Maarten Party (USP) Akeem Arrindell and Claudius “Toontje” Buncamper have expressed words of congratulations to MP Christophe Emmanuel on the victorious outcome of his recent case in which the prosecutor’s request to the Joint Court of Justice to prosecute him was denied.
The USP MP’s feel that Justice has prevailed in this particular case. But wondered how MP Emmanuel will restore his good name in the community after having it tarnished due to the alleged wrongdoings labeled on him by the prosecutor’s office. In 2019 MP Emmanuel was unable to successfully pass the screening to become a minister due to his pending case.
This is the second time in the seven years between 2012 and 2019 that the prosecutor’s office attempted to prosecute a sitting or former minister. In 2012 former minister of finance Hiro Shigemoto was accused of offenses by the prosecutor’s office. We all know the outcome of that situation. Today it is the former minister of VROMI Christophe Emmanuel. In the past years, several parliamentarians were summoned by the prosecutor to appear before the bench to defend themselves. Some still have pending cases, some were acquitted and some have been convicted. One would wonder if there is an attempt to bring credence to the adage that all politicians in St. Maarten are corrupt, while the dictum “innocent until proven guilty” is often not applied.
While we are aware that the prosecutor’s office has the right to investigate, and when deemed necessary, to arrest and detain individuals suspected of transgressions, we must be concerned with the unlimited sweeping powers of the prosecutor’s office. We have seen people, politicians as well as civilians, arrested in the most humiliating fashions and detained, only to be released a few days later, without any apology or signs of regret from the authorities.
While there is faith in the justice system, there is much uneasiness in the execution of the process to bring one suspected of wrongdoings to court. While the laws are on the books, they need to be revisited and reviewed. A society should not have to live in fear of the actions of those who are supposed to guarantee justice for all. The system is intended to bring security to its people, not fear.
We wish MP Emmanuel much success with his future endeavors, as he is now free to carry on living as any ordinary citizen should.