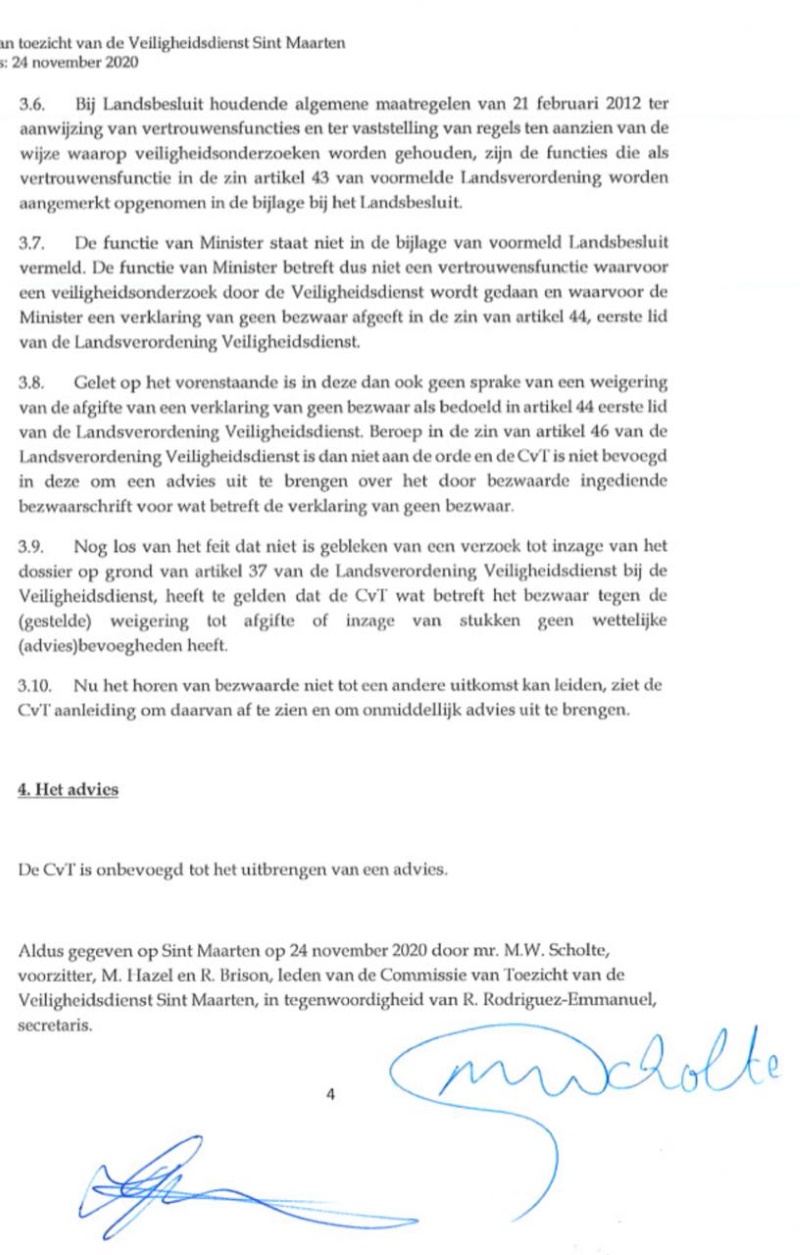 ~ MP Ottley filed a complaint with the oversight committee, Chairman of Parliament recused himself from the case. ~

PHILIPSBURG: --- The oversight committee that supervises VDSM has issued a decision after a complaint was filed by MP Omar Ottley regarding the screening of candidate Ministers.
The decision which was rendered on Friday states that VDSM does not have any authority to be screening Ministers because Ministers are not listed in the appropriate order in the national decree.
The three-member committee consists of the President of the Joint Court of Justice M.W Scholte, Chairman of the Council of Advice M. Hazel, and the Chairman of Parliament R. Brison.
It must be noted that the Chairman of Parliament Rolando Brison recused himself from the case filed by MP Omar Ottley because Ottley is a member of the United Peoples Party where Brison is the leader.
Based on 3.7 of the decision the committee states therefore the position of Minister does not fall under the purview of a VDSM screening whereby the Prime Minister would have to give a letter of no objection for the position of minister in accordance with article 44 paragraph 1 of VDSM national ordinance
In conclusion, the supervisory council is not authorized to even give advice in these cases such as minister cases.
While an official decision was rendered on Friday, November 28th, 2020 by the oversight committee of VDSM, the legal advisor to the USP who is now the legal advisor of the United Peoples Party Denicio Brison had sent a letter to the governor of St. Maarten since October 19th, 2019 questioning the legality of the screening law while Brison also posed several questions to the Governor.
It is clear from the decision rendered on Friday, November 27th, 2020, the screening process that has been taking place for the past 10 years was partly illegal which was done under the watchful eyes of several Prime Ministers.
The screening procedures for Ministers has three separate parts, one by VDSM that has to investigate the integrity of a candidate Minister, the fiscal part which deals with the screening of the person's taxes, loans, businesses, and other financial related matters while the Prosecutor’s Office is responsible for the judicial part of the screening for example if the candidate Minister had any conviction or is under investigation and such matters.

Click here to read the letter send to Governor