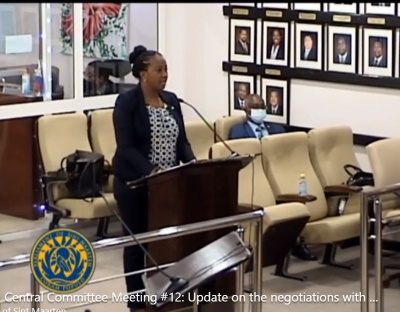 ~UPP, PFP, and NA supports the signing of agreement and COHO

PHILIPSBURG: --- The coalition partners that are supporting the government of St. Maarten give the Prime Minister of St. Maarten its blessings in the form of a verbal declaration to go ahead and sign the COHO law. The leader of the UPP faction was the first to give the Prime Minister the declaration State Secretary Raymond Knops wants when he demanded that she gets such prior to the December 18th meeting.

After making her position known, the UPP MP and Faction Leader Grisha Heyliger Marten gave the declaration that the State Secretary Raymond Knops is looking for, thereby Heyliger Martin then said “ I am sure of our Prime Minister of St. Maarten, the Honorable Silveria Jacobs, who I believe is with her back against the wall with the proverbial knee on her neck by the Dutch government and their representative State Secretary Raymond Knops, making the best decision proven to be beneficial to the people of St. Maarten, because at all time their interests are paramount, which is to allow the process of this COHO to go forward and to sign the "Landspakket" and related agreements. I support this as long as the mandate of parliament is respected, as well as all local, Kingdom, and international laws with regards to the handling of this law.”

USP not in support.

He warned that this kind of things must stop, he said all laws are by the high council state, something he said Knops do not care about, he described Knops as a little Napoleon.

Buncamper said that the people's right must not be taken lightly neither it must not be trampled upon. He asked if the government is considering challenging the proposed law in court. So far, he said the only ones that went to court was the PRO Soualiga Foundation. Buncamper said everyone is saying that the laws and conditions placed on the table by the BZK are illegal yet no one in government moved to the courts and filed an injunction.

The USP MP and faction leader said the demands made by the State Secretary is absurd, to say the least, he warned that the civil unrest that may take place in the event there is no money.

He asked Prime Minister Silveria Jacobs if she will tender her resignation if she does not get the full support of the Parliament of St. Maarten.

PFF leader and Member of Parliament Mellissa Gumbs also gave a declaration supporting the signing of the agreements regarding the COHO law. She commended the Prime Minister for all that she has done throughout the process, Gumbs said she hoped that the government of St. Maarten will use the tools that will be provided to enhance and safeguarding its finances.

PFP MP Raeyhon Peterson said that it is the Parliament of St. Maarten that put the Prime Minister where she is now because of the motion they passed also by supporting the PRO Soualiga Foundation that has been pushing the decolonization process. He said the PRO Soualiga have also disrespected the Governor of St. Maarten with the letter that was sent to him.

Emmanuel did not support, let the chips fall wherever they may be.

MP Christopher Emmanuel said he could remember the statements made by the Dutch in 2017 when they said twice that former Prime Minister William Marlin had to go. He asked if the tight jacket would fix the problem and, in his view, this is ‘Deja vue’ all over again. Emmanuel said there are all sorts of entities in the country such as the World Bank and NRB, the Integrity Chamber. He said the government of St. Maarten has been giving all the time and wants to know what has the country received from the $550M. Emmanuel said the Integrity Chamber and Border Control are all functioning within the country, yet today Parliament has the COHO before them, and the government of St. Maarten is entertaining it. Emmanuel made clear that he will not support the COHO or any other entity that will be coming to St. Maarten. Emmanuel said that the move made by the Dutch is all for political milage since there is an election in the Netherlands. The Independent MP said that bringing the islands to their knees will be Knops's legacy for this election. Emmanuel said none of it is in the interest of the people when the BZK is demanding 12.5% cuts in salaries, he said will be less money in the economy. He asked if St. Maarten is giving up on the last lap of the relay. Emmanuel said soon enough the economy will strive since the COVID-19 vaccine is moving at a fast pace. He said he will not allow Hitler thinking persons on the backs of the people of St. Maarten. He asked what St. Maarten is doing on its end.

Emmanuel said that the Minister of Finance Ardwell Irion has fought a good fight with the CFT, yet he is being thrown under the bus by the same people in the Council of Ministers that he is part of. He said the Dutch are asking for the COHO to be on the island for 7 years that will target people by placing more taxes on them. The Independent MP said that the Dutch are making the people of St. Maarten dependent by setting up tents around the island and dispensing money on cards. The island is becoming a CAF country in his view and as such, it is time for the people should stand up since all of it is unacceptable since their ancestors fought and worked hard for what they have as such they should not surrender. He urged the Prime Minister to leave the hatchet open and leave the chips to fall where- ever they may be. He said let the Dutch put the backs against the wall and then they will see what would happen.

Do what is best for the people, NA Faction leader

Faction Leader of the National Alliance William Marlin said he too can say ‘Deja vue’ again. He asked if the people are prepared since only those that are prepared shall inherit the future. Marlin said that in 2015 he spoke out against the agreement signed by former Justice Minister Denis Richardson, back then it was about the establishment of the Integrity Chamber.

Marlin said when he took office, he made clear that the Integrity Chamber was not a priority and the country was threatened with higher supervision, then later the Dutch Government misused the hurricane to get what they wanted such as the integrity chamber and border control and the so call $550M. Marlin asked if Parliament is prepared to tell the Dutch absolutely-not and allow the Dutch to pull the trigger. Marlin wants to know if the people are prepared to haul their own garbage, to deal with the school boards that will not get its subsidy.

Marlin said that they do understand the difficult position the Prime Minister is in and as such, she should do what is in the best interest of the people. Marlin on behalf of the National Alliance gives Jacobs its blessings to proceed with whatever discussion and signing that must take place.

Prime Minister Silveria Jacobs made a presentation to parliament on Monday during a Central Committee meeting that was urgently called to discuss the discussions with the Netherlands and the 3rd tranche of liquidity support.

At the opening of the meeting several letters that were sent to Parliament by the Prime Minister were booked in as confidential communication between the government and parliament.

Jacobs further explained that the COHO powers are limited, and they are not able to issue licenses., she said the COHO will only be there to assist the Ministries to execute their projects and to monitor the finance.

This also includes an amendment to the RFT (CFT) law, collaboration with Curacao, and the Consensus Kingdom Law, meaning St. Maarten will have to agree before this amendment can be applied.

The condition for the 3rd tranche liquidity that is specific for St. Maarten are

Jacobs said her government investigated all viable options to secure financial viability but could not find any, therefore the country has no other option but to accept the proposal given by the Dutch Government.
St. Maarten is between a rock and a hard place when it comes to choosing financial stability for its people and its autonomy. Jacobs said she has no choice but to put the needs of the people ahead of her personal feelings which she has spoken out against. Jacobs called on parliament to give the Council of Ministers to approve the conditions placed on the table by the Dutch Government.

She said that while St. Maarten is a place of opportunities and a place where dreams can come through, she felt that this should be the last time St. Maarten and its people are caught with their pants down.