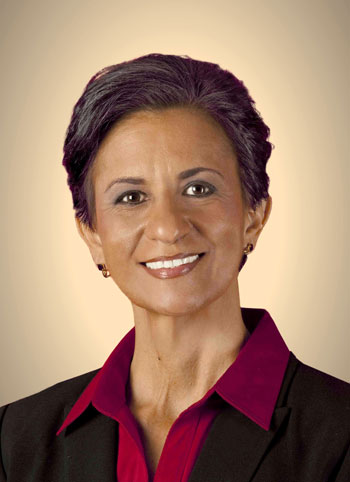 PHILIPSBURG:---  “Not only has the agreement for the country package been signed, but the Government has also announced the organization that it has put in place to guide St. Maarten's part in the agreement. What will follow now is the so-called implementation plans, although items in the country package are already being worked on. Case in point, we see from a meeting of the four ministers of Justice that it has been concluded that matters raised in the country package will be executed. So it is not as if everything is on hold until there are implementation plans. It is therefore paramount that the officially signed documents between the Dutch and St. Maarten Governments be shared with the Parliament of Sint Maarten,” stated Member of Parliament Sarah A. Wescot-Williams, regarding the Country’s Reform Package.

Wescot-Williams says what she missed in the Government’s notification about the St.Maarten's organization is the involvement of all stakeholders in this process - the involvement of the social partners and the larger communities of business, health, education, care, etc. In addition to that, the MP said, the Government of St. Maarten, in making the announcement regarding the agreement and the work organization, refers to the governing program. The Parliament of Sint Maarten is yet to receive a governing program of the current Government. The Parliament is yet to debate the National Development Vision!

“We all want a clear picture of where this Government wants to take the country and how exactly the country package of St. Maarten aligns with the NA/UP governing program as well as the national development vision, as announced by the government. It behooves the Government and the Parliament if we are serious about collectively deciding on the future sustainable development of this country to analyze for ourselves how we are going to carry on with this process in the context of the agreement signed with the Dutch Government.”

Further Wescot-Williams believes that “much of the process towards decision making that should be lead by the Government is now actually in the hands of -as it stands right now- a team of the internal affairs ministry in the Hague and the local government apparatus. Unlike what the government purports, this does usurp a lot of what the Government should be deliberating and deciding. In deciding on these crucial topics, we must get ahead of the curve. Any chatter that St. Maarten can, later on, take a different position at the handling of the draft COHO law is nothing more than wishful thinking because this train has already departed the station and the process based on the agreement has commenced.”

If that COHO law is not approved or if there is even the appearance that it will not be approved by St. Maarten, the MP expounded, then the agreement for the country package, etc. no longer stands, with all the dire consequences thereof.

“We could have been much further in the process and have some meaningful deliberations on the draft law and the country package, had the Government from the onset not playing hide and seek on the matter. The Government played hide and seek with Parliament in seeking its approval to reject the new entity. So holding off until we have the discussion regarding the draft new entity and thinking that we can then turn things around or in a different direction is an unrealistic and misleading view.”