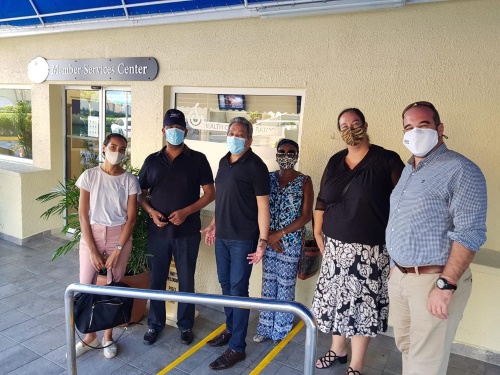 The Minister of Public Health, Social Development and Labour (VSA), Richard Panneflek was accompanied by the Head of Collective Prevention Services (CPS), Mrs. Eva Lista- De Weever, and a delegation from the Red Cross on Saturday 23 January, where he received an invitation to visit a testing location on the premises of Simpson Bay Resort Marina & Spa. The invitation extended allowed the Minister to view the testing facility that the resort has prepared to be ready for the requirements set fourth by the U.S. government and the Center for Disease Control and Prevention (CDC) for travelers returning or traveling to the United States. Simpson Bay Resort Marina & Spa also invited the Atrium, Flamingo, La Vista, and Royal Palm Resort to participate in the testing of returning passengers to the United States, and all mentioned resorts accepted.

The Minister was impressed with the initiative taken by the resorts to contacting Health Care Laboratory Sint Maarten (HCLS) to organize the possibility of their guests being tested so that they can return to the United States. The collaborative initiative was taken due to the U.S. Centers for Disease Control and Prevention (CDC) announcing that travelers flying into the United States from international destinations will now be required to show proof of a negative COVID-19 test before boarding their flight. This new policy will go into effect as of January 26th.

Minister Panneflek applauded the Simpson Bay Resort Marina & Spa for being proactive by making sure our tourists can come to St. Maarten knowing the necessary is being done so they can return home at ease.

The Minister was informed that although there are other hotels and resorts that took similar steps, a possibility exists for others to make use of this arrangement.