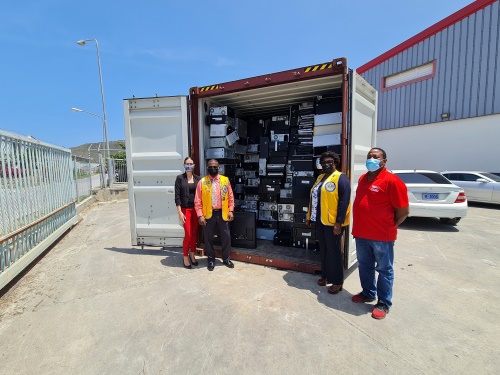 POND ISLAND:--- TelEm Group and the Lion’s Club of St. Maarten have successfully joined in a massive environmental effort to collect hundreds of damaged and broken computers, printers, and other electronic equipment so that they can be shipped abroad for recycling.

Many desktop computers, laptops, cable tv set-top boxes, and other telecommunication equipment were sorted and neatly packed into a 40-foot container that will now be bound for a recycling plant in the USA. Some of the units will be fixed and put back into circulation, while others will be stripped for parts to go into refurbished and reconstructed equipment.

According to TelEm Group Manager, Procurement and General Affairs, Carmen Lake-Reyes, an appeal to members of the public to bring in their broken and damaged equipment for loading into the container on April 1, was a huge success, with many residents taking the opportunity to rid their homes and offices of such equipment in their possession.

There was also a great response from various offices and businesses around the island who answered a separate call made by the Lion’s Club of St. Maarten for damaged and broken equipment lying in the corner of various workplaces for the group’s own e-waste collection program. The initiative led to the collection of hundreds of printers and computers that would otherwise have ended up on the local dumpsite, creating a potential environmental hazard for St. Maarten at some time in the future.

Lions Club president, Alphons Gumbs, was there to witness the loading of the container before its shipment out of St. Maarten. He thanked all the businesses and persons who listened to Lion’s call to bring in their e-waste during the past months.

“Collection is one thing but joining with TelEm Group to get the e-waste materials out of St. Maarten to a recycling plant is where the initiative will really pay off,” said Lion’s Club president, who thanked TelEm Group for helping to make this final part happen.

Carmen said a great deal of the e-waste that eventually came in was made up with old equipment long abandoned by the Government, who were only too pleased to find an environmentally responsible way of disposal.

Carmen says having been closed the 40-foot container this week, its shipment of e-waste equipment will be shipped off over the weekend bound for USA shores.