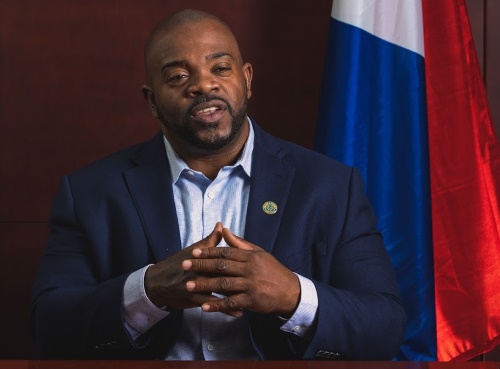 ~ Says Naf 39 million only when Knops gets what he wants ~

PHILIPSBURG:--- Independent Member of Parliament Christophe Emmanuel on Tuesday called on Minister of Finance Ardwell Irion to let civil servants know if they will get the 50% vacation pay owed to them from 2020 and the full 100% due for 2021 since there is no legal basis for a reduction or to not pay it. “A harsh reality is starting to set in for many,” the MP said, adding that the government remains quiet on the issue while it continues to hire more personnel and increase spending.
The MP noted that the government can find the money for anything it wants, including unsuccessful and embarrassing trips to Holland and an extra 2 million for garbage collection, “but cannot find the decency to tell its workers if they can expect what is due to them.”
Emmanuel said he is asked daily by civil servants if he has any information on whether or not the owed money will be paid. “Because for many of them reality is starting to set in when they look at uniforms and school fees, hurricane preparedness, insurance, and price of food. Many have depleted their savings and any kind of supplemental income is not there. So if they got by on 50% last year by dipping into savings, they do not have a buffer this year and that reality is worrying,” Emmanuel said.
In the meantime, he continued, government is seemingly suffering from “Mingo Syndrome”, with its spending habits and incurring new costs, contrary to what the Finance Minister has said publicly and what CFT has urged the government not to do.
“We are seeing vacancy ads for new civil servants at a rate of three a week in the media. We were told there is a hiring hold. Why is government taking on new salaries while they struggle to pay current salaries and benefits? The Finance Minister has not said what this amounts to in numbers, but the hiring of people can run you into the millions. We see recruitment for new police officers and we can’t figure out how to fix the issues of the current batch. We accept new vehicles for government and thereby commit funds for gas bonds and maintenance. We find the money for pet projects and increase garbage contracts by 2 million for no reason. We are not serious,” the MP said.
He chided the government for sitting back and doing nothing about the serial personal spending of the people’s money by the airport CEO and for not addressing the fact that the same PJIA spent well over US $ 10 million on Schiphol workers and consultants. “I actually should not be shocked with how they treat civil servants considering how they let the airport CEO treat airport workers. It is the same trend by the same COM. They simply do not care about people,” Emmanuel said.
As for the Naf 39 in liquidity support from the Netherlands, Emmanuel re-iterated that liquidity support will not come until State Secretary Knops gets what he wants from the charade being perpetrated on the people of St. Maarten under the guise of “good corporate governance” at PJIA. “If it comes, it will be after Knops gets what he, the Dutch government, and Schiphol wants. What exactly this is we still do not know even after the empty media tour put on by the Prime Minister of St. Maarten,” the MP said.
“What is Knops asking you to do with ‘people’ at PJIA or on PJIA boards? What is Knops asking you to do with ‘people on the holding board? Is he asking you to do something with the corporate structure at PJIA? Is it the intention to make the operations board of PJIA untouchable by transferring certain authorities to it? You are having a meeting this week with the Holding Board of the airport, will you inform them of corporate structure changes? What precedent will you then be setting? Based on Knops version of good corporate governance, is he saying that the CEO has to be suspended for his spending? What is happening with the agreement with Schiphol? Be truthful for once and come clean with the country,” the MP said.