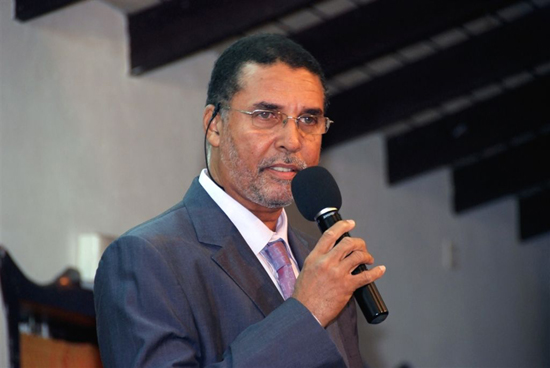 Marigot: --- Ousted President of the Collectivity of St. Martin Frantz Gumbs announced on at least three radio Stations this morning (Tuesday) that the UPP party who holds the majority in the council would be re-electing him to his position as President in the next election. Gumbs officially announced that he would be a candidate in the upcoming territorial election.
Gumbs said the party has taken a decision to re-elect him since they have absolutely no problem with him, even though there was a problem with the election itself.
He acknowledged that the August 7th election was annulled by the State Council due to the pre-printed ballots that was used with his name on it instead of blank ballots.

Gumbs said the executive council would remain the same and that the only position that has to be filled is his position which will be done in the next 15-days maximum. Gumbs said he did not receive the official documents with the full decision of the State Council but he is obliged to respect the 12 days delay. He said the COM has at least one month to hold the new election but the leading party would not wait that long. He also said that even though the present administration is faced with this dilemma they are still doing the people's business and they do not intend to go anywhere. Gumbs said "I am the president and will always be no matter what you say!" while First Vice President Daniel Gibbs said the UPP is united thus they are supporting Gumbs for the seat in the next election.

In the meantime, former first vice president Marthe Ogoundele Tessi said she personally heard the statements made by the president and his present first vice president but she would not be commenting on the issue unless she gets the full context of the decision that was rendered by the State Council. Ogoundele Tessi said she does not intend to make wild statements and then have to re-tract them. She said her lawyer is in contact with the State Council as he seeks clarification on the decision in its entirety. The former first vice president said when she receives that decision then she would officially announce her intentions.
Gumbs in his rebuttal to the State Council through his lawyers had asked that he be compensated with damages should he win the case. The person he wanted to pay those damages was Ogoundele Tessi whom he said wrongfully took him to the highest courts.
These and all other matters relating to the case are still not known. It is not clear if Gumbs would have to pay damages if that was eliminated by the council.
SMN News also learnt that the RRR party was busy meeting on Tuesday as they discuss the present predicament facing the island.

In the meantime several bloggers, council members from the opposition as well as resident's of St. Martin are calling on the present administration to throw in the towel and call a new election. The bloggers has charged that the UPP party is incompetent and they are nothing but disaster to the island and its people. They said already St. Martin would be recording its fifth presidents in less than two years, something they consider to be a disgrace to the island.