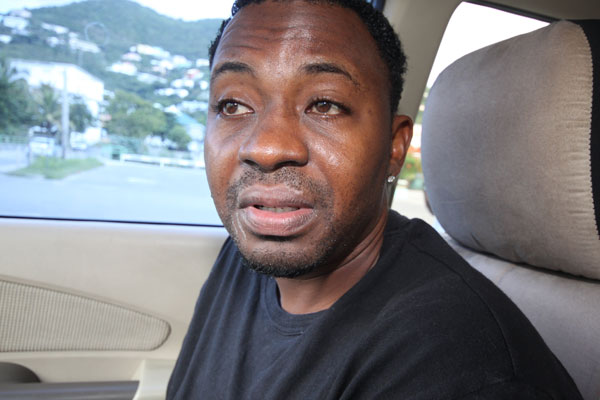 Philipsburg:--- Joel Fraser, the boyfriend of the late Latoya Bryson who died as a result of electrocution last week has decided to break his silence while grieving the sudden loss of his girlfriend of six years.
Relatives of the late Latoya Bryson have been accusing Fraser of killing their relative even though the police department and doctor on the scene said that the death of Latoya Bryson is a clear case of electrocution. Chief Prosecutor Hans Mos said on Sunday that police gathered enough evidence to show that Bryson was electrocuted. However, his office has decided to conduct an autopsy to determine the exact cause of death and to make sure the young woman indeed died of electrocution and to rule out foul play.
In an interview with SMN News, the distraught and grieving Fraser said that he lived with Latoya Bryson for some six years and the last night they spent together was one of the best nights since they were together. The young man said the night before his girlfriend lost her life, he picked her up and they were fooling around and having fun. That night he said they went to bed late and the following morning, Latoya woke him up because they were both late for work. "Latoya shook me a number of times and said baby get up, get up we are late, when I got up and realized that we were in fact very late I told Latoya to go and take her shower first while I was going to iron her clothes. Latoya washes her face with lots of products and that takes time so I wanted her to shower first because after that she had to do her hair. While ironing her clothes, I heard a sound pop, pop, and then I heard something fall. When I heard that I called out for Latoya twice and when she did not answer I went to see what had happened. As I got into the bedroom it was in darkness and so was the bathroom. Latoya was on the floor of the bathroom and water was pouring. I jumped into the bathroom to see what happened to her and when I could not get a response I came outside and requested help from the neighbors. I panicked and I was desperate to get her up so I tried giving her CPR while one of the neighbors called the ambulance. When they came they told me the doctor was coming and I thought they were going to help her but it was sometime after someone told me that Latoya died," Fraser said.
The young man further explained that he was questioned by the police but was never detained. "I told the police what I know. I did not see what happened and I am sure the investigation that is being conducted by the police will vindicate me. Fraser said that he believes that Latoya plugged in the curling iron so it could heat up while she was taking her shower and somehow the electrical cord ended up in the water and that was how she got shocked. He said Latoya was in the habit of plugging in the iron while she takes her shower so that it could be hot when she is done showering. "That is the only thing I believe happened and I did not see the electrical cord in the water because the place was in total darkness but one of the neighbors saw it when he came to help me. There were two men who came in the house and one of them was looking at her naked body and I grabbed a sheet and covered her and I even asked the guy not to look at my girlfriend like that."
Fraser said he is sure that he will be vindicated because he did not hurt his girlfriend and he is not responsible in any way for her demise.

Latoya Bryson is known in the St. Maarten community as a friendly and loving young woman. She was an employee of the harbor, Penha Perfumes, Caribbean Cash and Megaplex. However, Joel Fraser claims that he is the only one who knew the real Latoya Bryson and for years he said he covered for her and only some months ago revealed some truths about his girlfriend to her relatives including her mother. "I could not take it anymore and I needed to find help for her so I spoke to her relatives and some close friends of mine."
Fraser said he did not want to expose his late girlfriend's past but he is terribly hurt by the allegations that are made against him. Furthermore, he said, since the incident, relatives of the late Latoya Bryson have threatened his life even in the presence of police. "Some people even went to my job looking for me so I need to let people know what I was dealing with."
Fraser said Latoya was a compulsive gambler and one who was addicted to gambling. "Latoya stole between ten to fifteen thousand dollars from Penha Perfumes and blew the monies out in casinos. When her employers found out and were about to call police, that was when Latoya called me to say she was sorry and that she would get locked up. The owner of Penha liked Latoya and so instead of filing a complaint and having her locked up he made a payment agreement so that Latoya could pay him back his monies. Up to the day of her demise, Latoya was still paying that money back. She also had a number of people take out loans for her while I was constantly giving her monies to pay back her debts. Several persons in the community can come forward because they all tried to help Latoya by taking loans for her. She committed forgery while working at Caribbean Cash for someone who took out a loan for her and she was fired. Fraser said his girlfriend just recently got a job at the harbor as a tour guide while she also worked at the movies. "I am the one who was paying all the bills where we were living. I met Latoya there so I would give her the rent monies and many times Latoya did not pay the rent, she gambled the monies out and I had to borrow money or pawn all my stuff to get out of the situation while covering for Latoya. Fraser maintained that he loved Latoya and for that reason he would call her constantly to monitor her. Besides that, he said due to her gambling habits and the constant struggle to get out of financial predicaments they were always fighting and screaming at each other. "Some months ago she moved out and went to her mother's house because she felt that I wanted to control her but I had to because of the amount of people Latoya owed. My chain, games, and other personal items are in the pawn shop because of Latoya. I bought a car and put it in both of our names because she had nothing and for her to get a bit of collateral I put the car in both of our of names, now her relatives have taken the car without my permission and are driving it. It was after Latoya moved out she admitted to me that she had a gambling problem and that she would seek help and that is how we got back together. "I told Latoya to pay her debts, work and pay the people you owe, while I pay the rent, GEBE, buy food, and everything else. I told her mother about this some months ago and I even confronted her in the home of a close friend," Fraser explained.
The young man also showed SMN News several SMS messages where he pleaded with Latoya to stop borrowing monies and most importantly told her she should stop gambling.