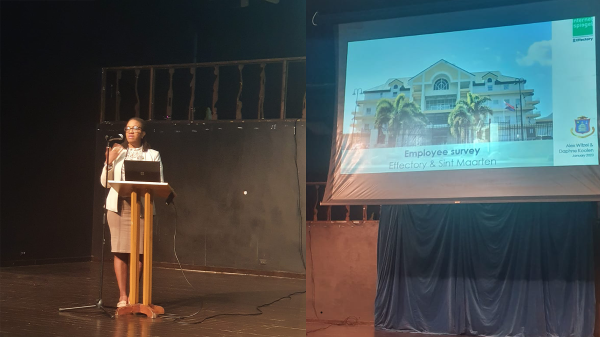 PHILIPSBURG:---  On Monday, January 23, 2023, the Ministry of General Affairs launched a Civil Service Employee Satisfaction Survey. This is the largest satisfaction survey conducted by the Government of Sint Maarten. The assessment is geared towards collecting a rich body of data for future evidence-based policy development, with an aim to bring about positive change in the organization.
A project team within the Ministry of Generals Affairs, with representatives from the Department of Personnel and the Department of The Interior and Kingdom Relations (BAK), is spearheading the project. This team is being assisted by, Effectory, an external company with expertise in conducting satisfaction surveys among employees.
The collected information will provide insight into how civil servants feel about their working environment. While there are no standard drivers for measuring satisfaction or well-being, commonly assessed factors used in this survey are, advancement opportunities; recognition; pay and benefits; job roles; training and development opportunities; management; and leadership.
Information sessions for all the ministries are currently ongoing and will continue in the coming weeks. During these sessions, civil servants are informed about the objectives of the survey, the confidentiality of feedback provided as well as the convenient and employee-friendly format in which the survey is being conducted.
This project supports one of the Government’s National Developments Vision priorities, namely the strengthening of the government, and is being implemented within the framework of the Country Reform Package.
“I encourage all civil servants to take part in the Employee Satisfaction Survey. On the road to a better functioning organization, it is essential that we also take a close look at how we can better operate in the best interest of our civil servants,” said Prime Minister and Minister of General Affairs Ms. Silveria Jacobs.

PHILIPSBURG:--- Minister of Tourism, Economic Affairs, Transportation & Telecommunication, the honorable Arthur Lambriex, returned from a successful five-day conference during which he received valuable feedback from international industry partners regarding further development of St. Maarten's tourism product.
Minister Lambriex led a delegation from St. Maarten to attend the 2023 Florida Caribbean Cruise Association FCCA PAMAC Cruise Virgin Voyages Experience, January 25-29. The goal of the FCCA conference is to help industry partners around the globe understand the Cruise Tourism business, learn about challenges and opportunities in the industry and find ways to grow their tourism business further.
During the five-day event, Minister Lambriex held essential discussions with key cruise and airline industry partners to further his goal of improving tourism in St. Maarten. "My delegation and I held a crucial meeting with the Puerto Rico Tourism Authority regarding jointly working with major airlines to reintroduce daily flights between St. Maarten and Puerto Rico, which I believe will benefit St. Maarten and the region when it comes to creating more options for airlifts from the US mainland to our shores," said Minister Lambriex. He said both destinations are "very excited" to get connectivity back between our two countries. The Minister said a joint approach would be an easier way to bring this to possible airlines that can provide such airlift.
Minister Lambriex also attended an introduction and team-building session with the FCCA team, their strategic partners, and tourism industry counterparts from neighboring Caribbean islands such as Jamaica, Curacao, Martinique, St Kitts & Nevis, and Aruba. As Minister of
"This was an important forum in which St. Maarten's stance, ideas, and concerns were well received and understood. We agreed that collectively we would work to increase cruise calls to our Port and have ships staying longer in Port, with extra emphasis on our off-season months to have some continuity throughout the year," explained Minister Lambert.
The Minister also met with Virgin Atlantic Voyages to discuss bringing the Virgin brand to St. Maarten. Another important highlight of Minister Lambriex's trip was a meeting with Royal Caribbean, Carnival Group of Companies, and Disney, during which they discussed future business developments for our island. Port St. Maarten will issue a press release within the coming days with more details of the meeting.
According to Minister Lambriex, one critical feedback from the Cruise Companies was challenges experienced concerning fuel consumption and conversion power. He said, "This led to discussions about shoreside plug-in possibilities, which would allow fuel savings. It would be a greener day in Port, making it even more attractive."
The Minister said Liquid Natural Gas (LNG) had been a path many lines are considering as a cleaner alternative. In this regard, St. Maarten can possibly find ways to invest in a refueling station for LNG and have the LNG system tied into the local grid. This approach could produce sufficient alternative power to allow ship plug-ins at more competitive market rates. In return, any additional energy produced could reduce the usage of current generators at NV GEBE that consume a lot of fuel at a not-so-competitive rate."
Minister Lambriex considered his trip an overall success and said the visits to Key West and Bimini highlighted many ideas and provided vital information, which will be helpful to St. Maarten as we improve our tourism product. "This is not just helpful for cruise tourism but also facilities and diversification of possible future stores, attractions, and services," said Minister Lambriex.
He said he looks forward to a follow-up zoom meeting with Royal Caribbean Cruise line concerning New Market Place in Philipsburg and continuing discussions on the proposed Water Park and Boutique Hotel, which are near final decisions. The Minister said he intends to see these projects through to fruition, as they are all great initiatives for all parties involved.
PAMAC is the Platinum Associate Membership Advisory Council of the FCCA. The organization routinely hosts hundreds of representatives of FCCA's exclusive membership program and other stakeholders in the cruise and tourism industry to brainstorm on improvements and innovations in the industry.

PHILIPSBURG:--- Personnel of Special Unit Robbery are once again investigating another robbery that took place in a jewelry store over the last few weeks.
On Saturday, January 28, 2023, Around 1 p.m. Central Dispatch received several calls of a robbery in progress at a jewelry store on Front Street.

Several Police patrols and Forensic Department personnel were dispatched to the scene.
Preliminary investigation at the scene indicated that three men fully dressed in black and wearing masks had entered the establishment and robbed the store of jewelry under threat of firearms.

It is the second robbery in a jewelry store within the last week and a half.
The detectives investigating these Armed robbery cases are asking anyone who has information about these robberies to contact the Sint Maarten Police Force, at +1 721- 542 22 22 ext. 204 or 205 or the anonymous tip line on 9300 (free of charge). You can also leave a Private Message via our Facebook page (Police Force of Sint Maarten – Korps Politie Sint Maarten) if you know or suspect something. 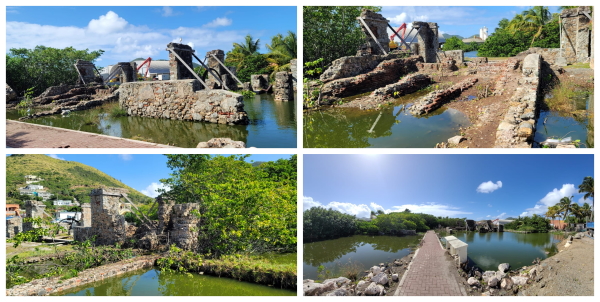 PHILIPSBURG;--- Dozens of persons, including community organizations came out on Saturday, January 28 from 7 am till afternoon and contributed towards a needed cleanup of the FOGA Salt Factory, which was built in 1862. The ruins of the old salt factory are a protected heritage site and fall under the protection of the Government of Sint Maarten, namely the Ministry of Education, Culture, Youth and Sport (ECYS). Due to overgrown fauna and pollution, the historical monument was not easily accessible nor visible to the public. The community clean-up was a call to action led by environmental advocate Paul Ellinger in collaboration with author and journalist Ralph Cantave. Ellinger, who is also a nature and landscape photographer, visited the site in the past weeks and was astounded at the unsightly state of this historical ruin. This resulted in a viral Facebook post, inviting persons to participate in a much-needed tidying up of the area. Over 50 people came to assist and a total of eight trips to the dump were made. Most of the debris besides grass and the pruned mangroves were: styrofoam, plastic, glass bottles, and household goods.

On receiving notice of this community-minded initiative via a letter on Thursday, January 26,
2023, Minister ECYS, drs. Rodolphe Samuel immediately invited Mr. Cantave and Mr. Paul for a
meeting with him and the Department of Culture. The objective of the meeting was two-fold,
firstly to discuss the laws in place that covers accessibility to all heritage sites and secondly to receive a more detailed explanation of the objective of the scheduled clean-up.
Both men were aware of the protection laws, nonetheless, during the meeting Ellinger
and Cantave explained that their reason was mainly based on their love for nature and the preservation of the island’s cultural heritage. Taking their genuine expression of interest in making a valuable contribution via this cleanup initiative, the Minister supported the initiative and stated that he will collaborate with Ellinger and Cantave for the second face of the clean-up. Further dialogue will be held moving forward between the initiators and the Minister. Following the meeting, both parties jointly visited the site before Saturday’s community venture.

Minister Samuel emphasizes that in FOGA ‘s present status, it is of tantamount importance that people visiting the site exercise great safety precautions and that a multitude of people does not all at once access the ruin; taking its ecological changes and delicate state into consideration. Details of the second phase are forthcoming and the community will be informed.

Saturday’s event was the first phase of the cleanup of FOGA, in which the site is now visible and easily accessible to the community and visitors. The clean-up was done to also
raise awareness on the importance of preserving and maintaining our cultural heritage as well
as to educate persons about historical structures that contribute to the history of St. Maarten. Ellinger and Cantave would like to thank the public for their participation and donations, as well as Belair Beach Hotel, Carrefour, West Indies Landscape Company (WILCO), Fast Professional Transportation, ONE SXM Foundation, the Ombudsman of St. Maarten office, the Lions Club, Bible Baptist Church, and Minister ECYS, for contributing items and refreshments to make the clean up a success.

~Centenarian celebrates another year of life.~ 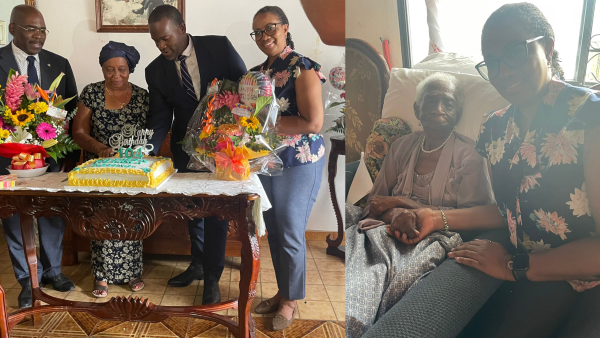 PHILIPSBURG:--- Prime Minister and Minister of General Affairs Ms. Silveria Jacobs was invited to the home of Mrs. Carmen Carrington, on Saturday, January 28, to celebrate her 104th birthday. The mother, aunt, grandmother, and great aunt, Mrs. Carmen, was lovingly celebrated today with family, friends, church family, and neighbors including His Excellency the Governor of Sint Maarten Ajamu G. Baly and Minister of Education, Culture, Youth and Sport Rodolphe Samuel.
During the celebration at Mrs. Carrington's home, Governor of Sint Maarten Ajamu G. Baly shared in cutting the cake with her daughter, Mrs. Iona Stuart, Prime Minister Jacobs, and Minister of Education Culture Youth and Sports Samuel.
“It’s an honor and a pleasure to stand here on behalf of the government and people of St. Maarten and celebrate the honor of long life with Mrs. Carmen Carrington and her village who take care of her every single day. I quote from the Bible in Job 12:12 which says, ‘Wisdom belongs to the aged, and understanding to the old,’ reminding us of the value of speaking with older adults." said Prime Minister Jacobs.
For Prime Minister Jacobs it is imperative to ensure the youth as well as our elderly get many opportunities to sit, talk, and share experiences, as what the wisdom of age has taught those blessed with a long life can never be fully grasped in any book.
The Prime Minister prays that the grace, love, joy, and positive attitude of Mrs. Carrington will continue to inspire all in her lineage to live a long and productive life here on earth, and most specifically St. Maarten.
On behalf of the Government and people of St. Maarten, we wish Mrs. Carrington a Happy and Blessed 104th Birthday with continued blessings for health and vitality!