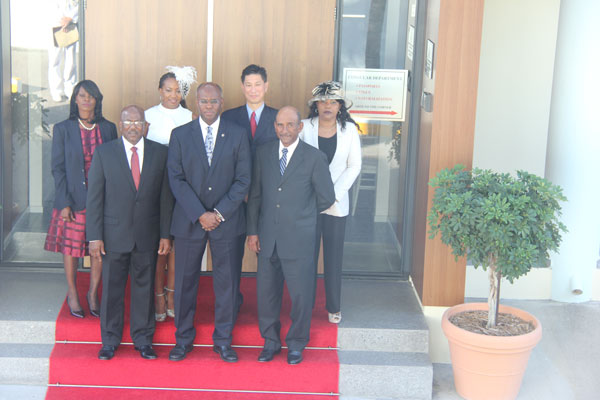 Minister Gibson Sr. has lots of work on his hands to balance 2016 budget.

PHILIPSBURG:--- Six of the eight Ministers from the Red, White and Blue coalition government also known as the group of eight sworn in on Thursday afternoon at the Governor’s cabinet in the presence of their family members and other invited guests. Among those that attended the ceremony were two of the three independent Members of Parliament namely MP Frans Richardson and MP Silvio Matser.
Those that were sworn in on Thursday are Prime Minister William V. Marlin who will also be substituting for the Minister of VROMI until candidate Minister Angel Meyers is fully cleared by the Prosecutor’s Office, Minister Silveria Jacobs, Minister Emile Lee, Minister Richard Gibson Sr. Minister Ingrid Arrindell, and Minister of Plenipotentiary Henrietta Doran York.
Prime Minister William Marlin, the third Prime Minister since St. Maarten became a country in 2010 said that his coalition partners took a pledge to stick together in order to bring back stability in the country, while their mission is to get the country back on track. Marlin said that the Minister of Finance Richard Gibson Sr. will be substitute Minister of Justice for a short period, the newly sworn in Prime Minister said that Gibson Sr. has a lot of work on his hands because a balance budget for 2016 has not yet been completed and presented to the CFT. Marlin said that the first priority of his government is to get the finances of the country in order so that the partial instruction placed on St. Maarten by the Kingdom Council could be lifted as soon as possible. 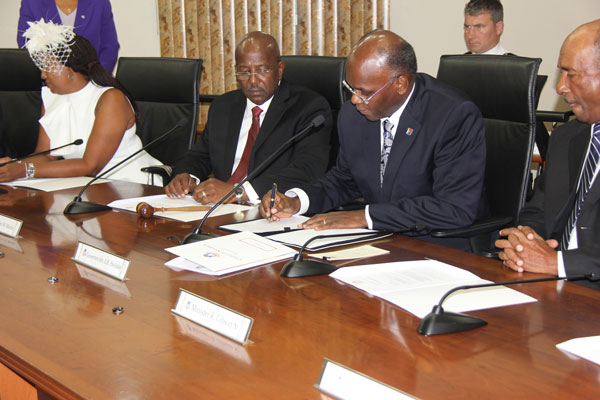 Another high priority for the red, white and blue government is to handle with urgency whether or not there will be elections on February 9th 2016. Marlin said that is “the million dollar” question among the people at the moment and certainly his government will address the matter and inform the people of St. Maarten in the very near future if elections will be held on February 9th 2016. Marlin further stated that his cabinet intends to resume the weekly press conference since they intend to be open and transparent, besides the weekly press conferences; Marlin said information will be disseminated on a daily basis because his coalition government do not intend to keep the people’s business behind closed doors.
Governor Eugene Holiday in his address reminded the gathering of how painful and hectic it was before this council of ministers could have taken its place in government. He said the episode started since September 30th when the former government got a motion of no confidence. Governor Holiday reminded the gathering of the preamble of the constitution of the country which he said must be respected, mainly the rule of law.
He called on the Ministers to be conscious of the decisions they take on a daily basis as they work. After the short address the Governor and Prime Minister signed off the decree for the replacement of Ministers which also had to be co-signed by the other four Ministers that makes up the Council of Ministers.
After the official ceremony and short speeches those in attendance were invited to join the new cabinet at their reception which was held at Sonesta Great Bay Hotel.

Chairperson of Parliament, Members of Parliament
Prime-Minister, Ministers,
Prefet Delegee of Saint Martin and St. Barths
President of the Collectivity of Saint Martin
Distinguished Guests,
Good Afternoon,
On September 30th, a shift in the majority in Parliament took place creating the basis for the transfer of governing responsibility to a new team of Ministers. During the seven week transition period which concluded today I consulted with various persons and named Mr. William Marlin as formateur to form a new government. You have, as a result, just witnessed the transfer of executive responsibility for the governance of our country from one team of Ministers to a new team of Ministers. The path to this transfer was not without challenges. To all who gave their input to the transition and formation process I hereby, also on behalf of the people of Sint Maarten, express my gratitude. And in particular I wish to thank Mr. William Marlin for his work and cooperation as formateur.
As I said the path to this transfer was not without challenges. Today’s transfer follows a period of polarized, complex and tense political actions and constitutional debates. During the past seven weeks a lot has been said and written about our constitution. And regardless of which side of the debate one took, it was evident that our people look to our constitutional principles as the foundation for the handling of their affairs. Looking ahead it is therefore important that we are reminded of the principles outlined in the preamble of our constitution, which slightly reworded, states:
We, The people of Sint Maarten, are determined to work with each other; We believe in the principle of democracy, We believe in the rule of law; We believe in the entitlement of all individuals to the fundamental rights and freedoms; We wish to create a constitutional order based on an open and approachable government; And We therefore to record our objectives and convictions agree that the provisions of the constitution shall have the force of law.
Ladies and gentlemen, these are our constitutional principles. It is as a result our collective obligation to adhere to these principles and work together to improve the lives of our people. Anything else will go against the interest of the people of Sint Maarten. And that is unacceptable.
Prime Minister, Ministers,
Today, seven weeks after the shift in the parliamentary majority and three weeks since the previous team of Ministers made their positions available you come before the people of Sint Maarten as a new team of ministers. A new team faced with the tasks of addressing the 2015 budgetary problems, of preparing the planned elections and of taking steps to introduce electoral reforms.
As you assume your mandate to govern this beautiful country, I trust that you, in keeping with your oath, will work to fortify our constitutional principles aimed at improving the wellbeing of our people.
Accepting the position of Minister through the taking of the oath today, is a solemn expression of your commitment to perform your duties with integrity. It is your pledge of allegiance to the King and the Kingdom Charter, it is your individual declaration to always uphold the Constitution of Sint Maarten and it is your solemn affirmation to always dedicate yourself to foster the wellbeing of the People of Sint Maarten. Through your oath, you have accepted the obligation to serve all the people of Sint Maarten. The fulfillment of this obligation must be based on the principles of democracy, on the rule of law, on respect for the fundamental rights and freedoms of all persons and anchored in our determination as a people to work together.
In that regard, there rests on you, individually as Ministers, and jointly as Council of Ministers a great responsibility. Your decisions will have lasting influences on the lives of the people of Sint Maarten. Thus, as you deliberate on taking action on the matters before you during your governing period, I wish you wisdom, individually and jointly, in the conduct of your responsibilities as you seek to meet your constitutional responsibility to the people of Sint Maarten.
With that in mind, I hereby congratulate the people of Sint Maarten with the installation of this new government and similarly congratulate each of you and your families with your appointments as Prime-Minister, Ministers and Minister Plenipotentiary.

Thank you, God bless you and May God Bless Sint Maarten and protect its coast.

Click here to view all photos of the swearing in ceremony on Thursday.