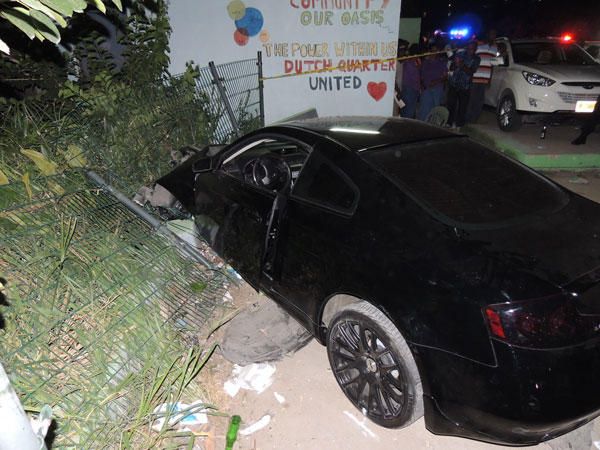 PHILIPSBURG:--- The Police Traffic department is presently investigating a traffic accident which occurred on Saturday January 23rd at approximately 06.15 p.m. The accident took place on the A. Th. Illidge road in the vicinity of Tan Tan Supermarket in Dutch Quarter. According to the report is that a black vehicle with license plate P-9698 was driving from the “TaTa the Bus driver” round about on the A. Th. Illidge road in the direction of Mount William Hill. In the vicinity of Madrid road the driver overtook a bus heading in the same direction.
While overtaking the bus, the driver of the car with the initials K.A.M. (23) for still unknown reasons lost control of the vehicle. The vehicle struck a concrete barricade on the side of the road and then collided into a concrete bench where three men were sitting. Two of these men were seriously injured. These men suffered serious injuries to their ankles while one man was treated on the scene and needed no further medical attention. One of the victims was taken, on his request, to the French Side while the other remains in the Sint Maarten Medical center for further treatment.