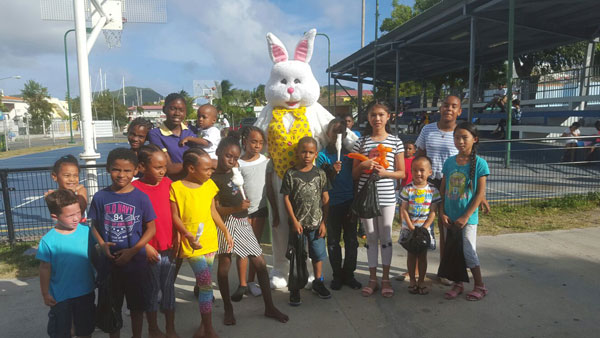 The biggest gangster is the one with a degree in his hand!

SIMPSON BAY:--- After two weeks of meaningful community building activities, the last Saturday of March concluded the Shoot Hoops, Not Guns project in Simpson Bay with a fun filled day of various activities highlighted by the 3-on-3 district basketball tournament. For the kids there were cotton candy, a bouncy castle, balloon artist, family games and the Easter egg hunt with the Easter bunny walking in the midst of the children. Domino tables as well as food and drinks were also available.

The day ended with a 3-on-3 basketball competition for ages 12-17 and 18-26 and a 3-point shootout where the winning teams received trophies and a gift certificate from Klass Electronics. All participants received medals. The players were cheered on by the crowd in the stands. Winners in the age category 12-17 were Ralph Coulanges, Thyrese White and Imar Tanis; winners in the age category 18-26 were Andrew Laclé, André Laclé and Leiland Huyyhue; winner of the 3-point shoot-out was Chiquon Hodge while the MVP trophy went to Lamar Halley.

During the intermission, an inspiring motivational speech was given by former Member of Parliament Romain Laville who had a clear message for the youngsters: “The biggest gangsters are the ones who are holding a degree in their hand and those who are trying hard to make something positive out of themselves.” The speech was well received with loud cheers and applause.

The Shoot Hoops, Not Guns committee extends a heartfelt thank you to the Simpson Bay Community Council for cooperating in hosting the yearlong project in their neighborhood as well as to all volunteers, sponsors and participants. The Shoot Hoops, Not Guns project will continue in May in St. Peters. The project’s goal is to regain community involvement and use sports to tackle an ongoing dilemma of gun violence. After the 10th district with a major basketball court is visited, all district champions will face off in a grand finale.