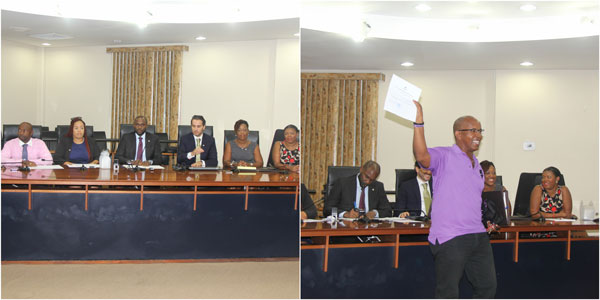 OSPP almost missed getting their color.

PHILIPSBURG:--- The One St. Maarten People’s Party (OSPP) Lenny Priest almost missed his party color since he showed up to the meeting on Friday morning just seconds before the Voting Bureau announced that they would follow the law and assign the political party one of the five remaining colors since no one from the OSPP did not attend the 9am meeting submit in writing the color they wanted for this year’s election. Leader, of the Political Party Lenny Priest, saved his faith as he walked through the door with his letter requesting that the OSSP be given the color purple which was granted to him.
Almost all political parties in the tribune at the A.C Wathey legislative hall was not in agreement with the voting bureau who adjourned for five minutes to decide how they would have proceeded.
Also late in submitting their request in writing the Leader of the Peoples Progressive Party (PPA) Gracita Arrindell was in the tribune but left to prepare her letter in writing. Arrindell also returned on time and got the PPA’s color which is orange.
Leader, of USP party Frans Richardson, also did not have a written letter, and also questioned the Voting Bureau on the procedures they are following because their party had their color in the last election. Richardson then walked up to the members of the voting bureau who provided him with a note pad and he wrote down that the USP wants the color blue which also assigned to the USP.
As for the numbering and colors' the voting bureau followed the procedures by placing a piece of paper and the names of the political parties in two separate transparent boxes and as they pulled a number and name the numbers were assigned to each party.
The following parties were assigned their numbers and color that will appear on the ballots on election day.

Chairman of the Voting Bureau Jason Rogers read out the articles of the law which the voting bureau has to follow, he also mentioned that each political party was notified of the date and time of the meeting to assign colors and numbering and that information he said was also published.