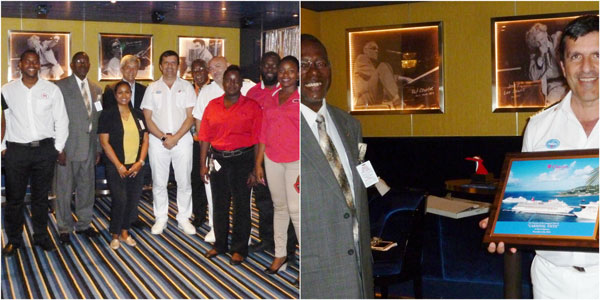 POINTE BLANCHE:--- The third new cruise vessel to call for the month of November, the Carnival Vista on Saturday, November 12, was welcomed by representatives of Port St. Maarten Management and cruise tourism stakeholders.
During the traditional plaque exchange and words of welcome, Carnival Vista Captain Stefano Batinelli told those present it was an honor for him to be in Sint Maarten on the biggest ship of Carnival cruise lines which is the first prototype in the world and the first of 10 to be constructed. He added that passengers love Sint Maarten as it’s a great destination pointing out that safety is key. It was pointed out that it’s very important to keep the destination safe because a few incidents could change things. The importance of crew spending was also pointed out during the vessels stay.
The Vista is also one of the most energy conservative vessels ever built. Its sister ship, Carnival Horizon, will be launched in 2018. Batinelli also visited the destination when he was Captain of Carnival Breeze back in 2012.
Port St. Maarten’s General Affairs representative Hector Peters, welcomed Captain Batinelli, his passengers and crew to the destination, adding that he looked forward to many more visits bringing thousands of visitors to the country’s shores.
Peters said the vessel is a beautiful one offering many amenities for its passengers. “Port St. Maarten Management continues to work diligently to acquire more business for the country’s cruise sector by speaking with cruise line Executives and itinerary planners with respect to adding the destination to their schedules. This continues to be accomplished as we see the third new ship visiting our island,” Peters concluded.
Stakeholders present for the plaque exchange ceremony were the Dutch St. Maarten Taxi Association, Accessible Ventures and S.E.L. Maduro & Sons who are the ships agents.
The Vista was in port with 4300 cruise passengers. The vessel was in Europe for five months prior to arriving in New York last week. Sales have been very good as bookings are sold out up until February 2017. Prior to arriving in Sint Maarten, the Vista visited St. Thomas and is now on a three-day at sea journey back to New York City. The Vista will homeport out of Miami starting late November/early December.
The Carnival Vista was handed over to Carnival Cruise Lines in April 2016 from the Fincantieri shipyard in Italy. Vista is the newest, largest and most innovative ship of Carnival.
The Vista was repositioned to Trieste, Italy, where it departed on its maiden voyage on May 1, kicking off a summer schedule in Europe that ran through October 2016. Following a 13-day trans-Atlantic crossing, Carnival Vista is operating a pair of 11-day cruises from New York during the month of November 2016 before launching a year-round Caribbean service from Miami.
Carnival Vista offers a number of unique features, including a groundbreaking suspended cycling experience called SkyRide, the first IMAX Theatre at sea and the RedFrog Pub & Brewery offering three different kinds of beer brewed on board.
Also new onboard is Family Harbor with special family accommodations and a family concierge, along with the tropics-inspired Havana staterooms and suites featuring a dedicated pool area. The ship’s outdoor spaces include a massive WaterWorks aqua park, highlighted by the 455-foot-long Kaleid-o-slide, the longest slide in the fleet.
Carnival Vista has a gross tonnage of 133,500; a length of 1,062 feet; beam of 122 feet; featuring 15 decks and carries 1,450 crew. The vessel was built for approximately US$900 million.