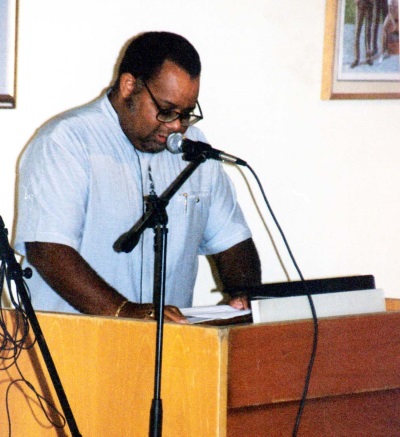 PHILIPSBURG:--- Gracita Arrindell former President of Parliament states that “it is with deep sorrow we mourn the passing of our former colleague, the late Mr. Louis Duzanson, former head of the department of General affairs Island Territory St. Maarten”

“Mr. Duzanson was loved and highly respected by all who had the privilege to work and be trained by him for decades.
He was particularly, skilled in document registration and archiving.
His work went far beyond the correct and timely processing of documents traversing the corridors of the government apparatus. He was generous in sharing his knowledge of past administration events. He explained how, when and why a particularly important decision was made and by whom.
In this position of trust, Mr. Duzanson never compromised his integrity, states Gracita.”

Arrindell said, “ he was an unwavering professional in his work with colleagues as well as members of the former Executive and Island Councils. Mr. Louis Duzanson understood and respected the position he was in charge of managing.
Leading by example, always courteous, respectful to the public visiting his office, no matter who you were”.

Gracita continues and said, “Preserving our administrative history was clearly his passion.
Mr. Duzanson took pride in sharing his knowledge of our political – administrative past. Many sought and received his advices for research purposes, especially on matters pertaining to documents regarding prior Island Council and Antillean parliamentary elections”.

“ Mr. Louis Duzanson, was a St. Maarten encyclopedia long before ‘Google’ became a popular search engine. He shared with a keen eye for details, memorable political and administrative events prior to the new constitutional status of St. Maarten achieved on October 10th, 2010”.

Arrindell continues and states, “highly regarded for his knowledge of and experience within our public administration, Mr. Duzanson was appointed in 1990, chairman of the ‘workgroup reorganization of the government administration’.
Under his leadership, supported by one technical assistant,
Mr. Gerrit Kassander, other heads of departments, including my person (as the counterpart to Mr. Kassander) the Government Administration was restructured. This major operation included the introduction of the current ‘Sector Organization’ structure, that included in-house tailor-made training for front office civil servants”.

“Nineteen- ninety- two (1992) was another important year in our constitutional history. Island territory Sint Maarten was placed under Higher Supervision by the Dutch government and co-administered by the then Antillean government of Maria Liberia Peters. Local decision-making became centralized.”
The offices of the Lt. Governor, the Island Secretary and the Department of general affairs played an important role in recording, and transfer of all decisions of major financial or administrative consequences via Willemstad to The Hague.
Mr. Duzanson and his team, eased the burden of the local administrators by executing this extraordinary task timely and professionally, as deliberations continued between the three layers of government at the time; The Hague, Willemstad, and Philipsburg.”

Gracita further said that “Louis was always concerned about the lack of priority for preserving our administrative/political decision-making history”.
“After our island’s devastation by hurricanes Luis and Marilyn in 1995, the need became more urgent to digitally record and preserve what was left of our administrative history, including the Island Council meetings”.
“Encouraged by St. Maarten author and renowned poet Lasana Sekou, Louis finally put pen to paper and wrote
‘An Introduction to Government- Island territory of St. Maarten” (House of Nehesi Publishers, 2000,2003), I was honored to be the guest speaker at the book party, held at the Jubilee Library in 2000”, said Gracita.

“Mr. Louis Duzanson’s contribution to his island and to preserving a full range of our administrative history, is ours to have and to record further and more securely for future generations to come,” said Gracita

Arrindell concludes and said, “We mourn the passing of Mr. Louis Duzanson, a great loss to his son, his wife, family and friends as well as to our nation. We can celebrate his life and honor his legacy by naming the future government archive department or section of the new library in his name.
An archive that is modern, and meticulously put together as he would have done.
“Mr. Louis Duzanson, Thank you for the privilege of your service”.